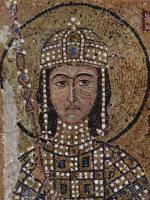 Anna Comnena, author of the Alexiad

Who was Anna Comnena?

More about Anna and Alexios
All our medieval Europe articles

Anna was a smart and hardworking girl. So her father favored her over her six younger brothers and sisters. She had tutors for every subject: astronomy, math, medicine, philosophy, history, geography. Her parents disapproved of Homer, though, because he wrote about the old gods, and she had to read the Iliad and the Odyssey secretly.

Anna got married at 14

When Anna was 14, she married Nikephoros. He was twenty years older than her, from another powerful Byzantine family. Anna hoped Nikephoros would help her get power. As a young woman, she oversaw a hospital and orphanage in Constantinople, and taught medicine there.

Anna tried to get power

When her father Alexios died in 1118, Anna was thirty-five years old, and eager to rule, but her younger brother John took power instead. Anna was furious. She and her husband apparently tried to kill her brother John at their father’s funeral, and when that failed tried to raise an army to fight John. When all this failed, she quietly raised her four children, but she never stopped being angry.

Anna wrote a history of her family

After Nikephoros died in 1137, Anna, who was then 54 years old, retired like many older women to a convent and, like Heloise and Eleanor, found power there.

What is a convent?
Who was Heloise?

Anna spent the rest of her life finishing a long, detailed history of her father’s reign that her husband had started, imitating the style of Thucydides and Xenophon. Anna’s main goal was to show that she, and not her brother, should have inherited power. But she also produced an accurate and insightful account of the Byzantine view of the First Crusade.

What was the First Crusade?

And she left us her insights on what makes a person a successful ruler. Anna seems to have died around 1150 AD, when she was about 67 years old.

Learn by doing: write a biography of your own father
More about Anna Comnena