Who was Thucydides? Ancient Greek historian 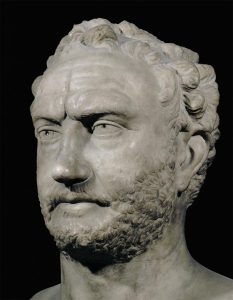 Thucydides, carved in the 200s BC, so long after he died. Now in the Louvre, in Paris

Thucydides (thoo-SID-id-ees) was an Athenian from a rich family. He was related to the Athenian general Miltiades, who led the Athenians against the Persians at Marathon. Thucydides also became a general in the Athenian army. He led troops in the Peloponnesian war with Sparta in the late 400s BC, but when he lost a battle the democratic government exiled him for the rest of the war (they made him leave Athens and leave the Athenian army).

Thucydides left Athens and spent the rest of the war writing a book about how the war started and what happened during the war, and why the Spartans finally won. Most of what we know about the Peloponnesian War comes from Thucydides’ book. Thucydides died soon after the end of the Peloponnesian war.

Thucydides’ work is famous because he made some big advances in historical methods. First, Thucydides tried to find out the facts from trustworthy sources, especially men who had actually been there when the events happened. Second, much more than Herodotus, Thucydides tried to figure out why these things had happened, without saying that it was fate or because the gods were angry. Third, Thucydides isn’t just interested in the Peloponnesian War for its own sake; he tried to use the events of the war to figure out more general things about why people act the way they do.

But Thucydides wasn’t a perfect historian. He often reports long speeches, especially in the debate between Athens and Melos that nobody could have written down or remembered. Though he may have known approximately what the speaker said, Thucydides is clearly making up the exact words. And, unlike Herodotus, Thucydides saw history entirely as a matter of politics and warfare, and hardly ever reported on women’s history, economic history, or scientific advances.

Learn by doing: read the Melian Dialogue and discuss who was right
More about the Peloponnesian War

Bibliography and further reading about Thucydides.