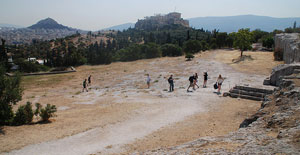 The Pnyx, where the Athenian Assembly met

When did Athens attack Melos?

In 416 BC, Athens and Sparta were right in the middle of the Peloponnesian War. As part of that war, the Athenians got in an argument with the island of Melos. It ended in disaster. Melos was an island in the Aegean Sea, between Greece and the Persian Empire. Although it had originally been a Spartan colony, it had recently been independent and neutral. Melos had not taken sides with either Athens or Sparta in the war.

Athens demands that Melos join their side

In 416 BC, the Athenian democracy voted to send a group of representatives to Melos. They demanded that Melos join the Athenian side and pay tribute to Athens, and help Athens fight against Sparta. The Melians (the people of Melos) said no. They had always been peaceful, and neutral, they said. And they had only a small army and did not pose any threat to Athens (which was true). They appealed to the common decency of the Athenians to do what was right.

The Melian Debate: the Melians explain themselves

The Athenians answered that as far as they were concerned, might made right. “The strong do what they can, and the weak suffer what they must.” The Athenians threatened to besiege Melos and capture it. They said that after they captured Melos, they would kill all the men, and sell all the women and children into slavery. The Greek historian Thucydides wrote down his memory of the debate. The Melians make several arguments, and the Athenians counter all of them.

First, the Melians argue that they’re a neutral city, and no threat to Athens. The Athenians reply that if they fail to conquer such an easy target, they themselves will look weak, and their enemies will be encouraged. 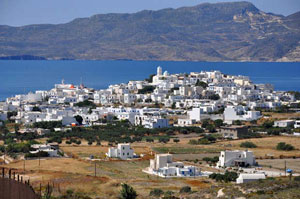 The island of Melos

The Melians say that they have to defend their city in order to keep their honor. The Athenians answer that it’s not about honor, just about saving their lives.

The Melians argue that even though they are weak and outnumbered, they could still win. The gods might help them, or the Spartans might come help them. The Athenians answer that the gods help those who help themselves – the stronger side will win. They repeat that there’s no shame in surrendering when your enemy is so much stronger. But the Melians again refuse to surrender.

What happened to Melos?

So the Athenians attacked Melos in 415 BC. Sure enough, they soon defeated the Melians. The Spartans did not show up. And, as they had said they would, the Athenians killed every man on the island old enough to fight. And they sold all of the women and children into slavery.

The democracy in Athens had voted to do this. Many of the voters were the same men as the soldiers who killed the men of Melos. Still many Athenians felt the massacre was a terrible crime. Euripedes‘ Trojan Women, performed that same year, may be a commentary on Melos – as well as a foreshadowing of what would soon happen to Athens. On the other hand, if the Athenians had won the war and the Athenian Empire had been a big success – perhaps eventually conquering the Persian Empire as Alexander did – maybe the massacre at Melos would seem more justified?

Who was Euripides?
The Trojan Women play
The end of the Peloponnesian War
Alexander the Great

It’s worth considering that Alexander, whose grandfather may have been old enough to remember Melos, killed eight thousand men after he took the Phoenician city of Tyre, and sold thirty thousand women and children into slavery – and yet we hardly remember that now.

Learn by doing: Debate who was right in this discussion
More about the Peloponnesian War

Bibliography and further reading about Thucydides: