When Alexander, the oldest son of Philip, King of Macedon, was born in 356 BC, the greatest empire in the world was the Persian Empire.

More about Philip
What was the Persian Empire?
All our Ancient Greece articles

Alexander’s father Philip was a strong and ambitious king. He wanted more power than just his own little kingdom of Macedon. Philip spent most of his life conquering the cities of Greece, to his south.

He built a great army, that used new weapons and new ways of fighting and won its battles. Philip wanted his son Alexander to be an important, educated man. So King Philip hired the great Greek philosopher, Aristotle, to come teach his teenaged son Alexander and his friends.

Alexander went to school for a while. He read the Iliad and the Odyssey, and books about the Persian king Cyrus. He read Herodotus and Thucydides, and probably Plato.

Ancient Greek schools
Homer’s Iliad and Odyssey
Who was Thucydides?

But he was also learning how to fight. Alexander was a very good soldier and commander even when he was very young. By the time Alexander was eighteen years old, he led the left wing of his father’s army to victory at Chaeronea, the last big battle to conquer Greece. 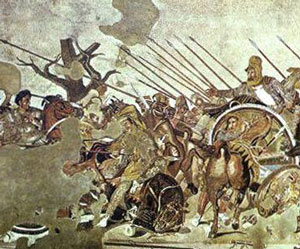 Two years later, when Alexander was twenty years old, a guardsman killed his father, Philip, and Alexander became king of Macedon and Greece.

Soon Alexander decided to be like his heroes Cyrus and Achilles and conquer the Persian Empire for himself.

Who was Achilles?
Cyrus the Great

In 335 BC, Alexander crossed over the Hellespont into the Persian Empire, marching his army south along the Mediterranean coast towards Egypt, conquering all the cities along his way (most cities actually just surrendered when they saw him coming).

What was going on in Egypt?

The Battle of Issus

After Alexander conquered Egypt, he finally met and defeated the Persian king Darius III in battle at the battle of Issus in 333 BC. Darius ran away, and Alexander continued on through Mesopotamia (modern Iraq) into Persia itself (modern Iran).

Learn by doing: trace Alexander’s campaigns on a map
More about Alexander