Alexander the Great in India

In 326 BC, Alexander the Great conquered the Persian part of northern India. Alexander was a Macedonian king. So he was  an Indo-European, like the Persians.

Alexander was conquering the whole Persian Empire. He conquered northern India (modern Pakistan) as part of that process. Pakistan had already been part of the Persian Empire for a long time before Alexander got there. It must have been exciting for Alexander to reach Central Asia, because at this time Central Asia was much richer than Greece. Alexander didn’t stay in Central Asia very long though.

The Sogdians in Central Asia
The Persian Empire

Alexander stopped conquering when he reached the end of the Persian Empire. According to some stories, his soldiers refused to go any further. They thought they were far enough from home already. They didn’t want to go fight in unknown territory. So Alexander left India (Pakistan) after a couple of years and went back to Babylon, where he died.

The death of Alexander the Great 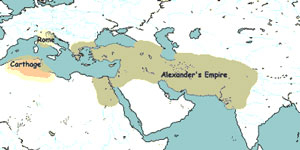 But even though he left quickly, Alexander had a lasting effect on India. Alexander left behind several thousand Greek soldiers, to keep an eye on things. These soldiers had with them writers, artists, sculptors, and teachers. They built Greek cities in Afghanistan and in the Indus valley. The Indians learned about a lot of Greek culture this way. They learned to carve life-size stone statues, and maybe they learned how to make glass beads.

The Greeks learned a lot of Indian ideas too; they learned about cotton cloth, steel, up to date medical knowledge, and some Buddhist philosophy.

More about Indian medicine
History of cotton
Where did steel come from?
Buddhism in India

Learn by Doing – Indians to Greeks, Greeks to Indians
More about Mauryan India
More about the Sogdians

Bibliography and further reading about Alexander the Great: