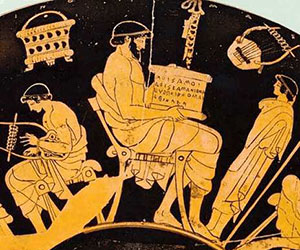 Greek schools: The students stand before the teachers.

Most Greek children never went to school at all. Girls, to begin with, always stayed with their mothers until they were married, either at home or working in the fields.

What if they were enslaved?

Enslaved children, whether boys or girls, also could not go to school, and many children in ancient Athens and Corinth and other Greek cities were enslaved. But some enslaved boys did learn to read and write at home, because their owners wanted them to grow up to help run the business, or write letters for them, or keep their family accounts.

Slavery in ancient Greece
All about ancient Corinth

Did poor kids go to school?

Any boy who was poor, even if he was free, also could not go to school: his family could not afford to pay the teacher, and besides the family needed the boy’s work at home. Poor boys worked in the fields, planting and weeding, or they worked as apprentices in shops, learning how to cut hair or make shoes. Some boys herded sheep or cattle. There were no public schools.

History of sheep
Who invented shoe leather?
More about the Greek economy 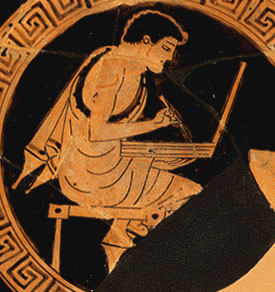 A Greek student writes an essay on a wax tablet (not a laptop!) 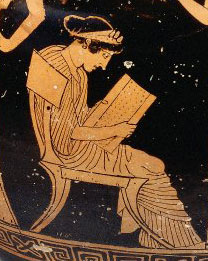 A woman reads a scroll

Still, people who could spare the money did try to send their boys to school. Without learning to read and write and generally becoming educated, boys could not hope to participate in politics when they grew up.

How old were Greek kids when they started school?

Boys started school when they were about 7 years old. Before that, people didn’t want to waste school on kids who were so likely to die of dysentery or malaria. Boys usually went to school until they were about 13.

What is dysentery?
Where did malaria come from?
Life expectancy in ancient Greece

Greek schools were small. They had only one teacher and about ten or twenty boys. They met in a small rented storefront, or sometimes just under a tree outside. There were wooden benches, and a chair for the teacher, but no desks. In those days people thought only dignified grown-ups should have backs to their chairs. Kids and poor people sat on wooden stools. 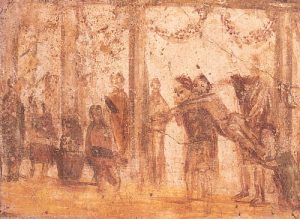 A South Italian teacher beating a boy at school. From the Villa of Julia Felix, now in the Naples Archaeological Museum

Did Greek teachers hit the kids?

At school,  teacher often hit the boys with sticks if they didn’t learn fast enough. Many boys were terrified of going to school, because the teachers hit them so hard and so often.

In those days, teachers thought hitting kids made them work harder and learn faster. But really it just made the kids angry and frightened. (Today it’s against the law in most places for teachers or principals to hit kids.)

An enslaved man – a paidogogus, or boy-leader – walked with some richer boys to school, waited while they were at school, and walked home with them after school. The paidogogus’s job was to make sure the boys were safe from assaults and harassment, and that they behaved themselves at school and on the way there and back. 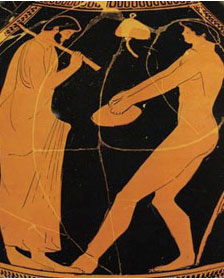 An athletic coach holding a cane to hit the boys if they don’t throw the discus far enough.

Was there a summer vacation?

There was no long summer vacation in those days, and there were no weekends.

But there was no school on religious festival days, and probably that added up to about as many days as you have off. Their days off probably came three or four at a time, more often than your long holidays, but less often than weekends.

What did boys learn in Greek schools?

Who was Homer?
Summary of the Iliad
And the Odyssey

Probably they memorized these verses from slabs of wood that had just a few lines written on them, so they could learn those lines and then pass their tablet to another boy when they were done with it.

When you had finished learning your lines for the day, you went up to where the teacher was sitting and recited them to him. If you got them right, he would praise you and give you another tablet with more lines to learn. If you got them wrong, he would beat you with his stick. Most boys were very nervous about reciting!

What did Greek kids use to write on?

When you were learning to write, you didn’t use papyrus and ink – they were much too expensive for kids. The teacher wrote out the Greek alphabet, and then sentences, on pieces of pottery, or on wood, or by scratching their letters into a thin wax coating on a piece of wood. You copied them over and over underneath his writing until you could do it well.

How to make your own wax tablet
Where did wax come from?
History of the alphabet

What is an abecedarium? 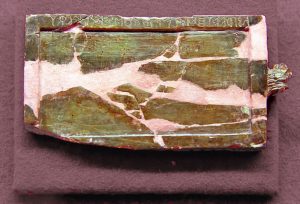 A Greek abecedarium on a wax tablet from Marseilles, in southern France. The Greek alphabet is written backwards, from right to left.

Greek people called the scrap that had the alphabet written out for you an abecedarium, which is one of my favorite words!

More about the Greek alphabet

Did Greek schools have music class?

Boys also learned to play the lyre (the kithara) and the pipes (the aulos), and to sing. Often their fathers called them in to their dinner parties to play and sing for the guests.

How about science class? Or gym class?

They learned some astronomy, and some geometry, too. Maybe they learned to use an abacus. And from a different teacher, after school, they had athletic coaching. Their coach carried a stick to beat them with, too!

Children and Childhood in Classical Athens, by Mark Golden (1993).

Ancient Literacy, by William V. Harris (1991). Groundbreaking. Argues that there was much less literacy in the ancient world than people have assumed.

A History of Education in Antiquity, by Henri Marrou (1948). Nothing better has come along yet, so this is the old stand-by.

The Gymnasium of Virtue: Education & Culture in Ancient Sparta, by Nigel M. Kennell (1995).