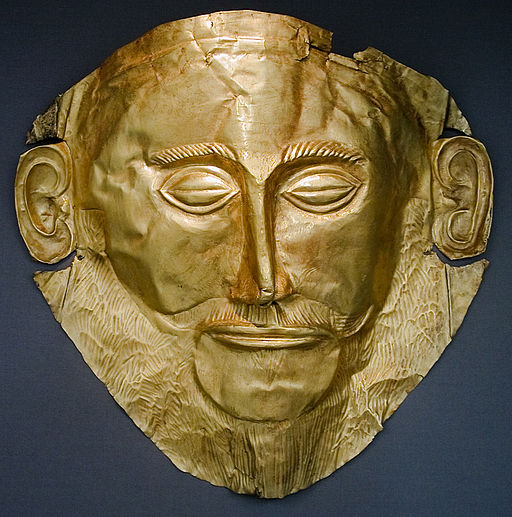 Government of ancient Greece: the Mask of Agamemnon, from Mycenae, Greece (1500 BC). Now in Athens

What kind of government did Ancient Greece have?

What is a city-state?
More Ancient Greece articles

People‘s ideas about what made a good government changed over time, too.

Aristotle and the government of Ancient Greece

The Greek philosopher Aristotle divided ancient Greek government into monarchies, oligarchies, tyrannies and democracies, and most historians still use these same categories. A monarchy is when a king or queen (or in Sparta two kings) rules the city-state.

An oligarchy is when a council of rich people inherits power from their parents. (Oligarchy means “the rule of the few.” A tyranny is when one of those oligarchs seizes power and rules illegally. And a democracy is when the people elect representatives, or choose them using a lottery system.

Spartan girl running (ca. 500 BC), maybe as part of religious games sponsored by her government

In the Late Bronze Age (the Mycenaean period), between about 2000 and 1200 BC, all Greek city-states seem to have been monarchies, ruled by kings. Homer’s Iliad, and Greek mythology in general, shows us a whole series of kings like Agamemnon and Theseus, and some of their palaces have survived for archaeologists to dig up.

After the Dark Age, though, only a few Greek city-states still had kings. Sparta is the most famous of these, though actually Sparta had two kings, usually brothers or cousins, at the same time. One would stay home and the other go off to fight wars.

In the Iron Age, the government of ancient Greece moved away from kings. People started to feel that having a king was a little old-fashioned. Instead, oligarchies ruled most Greek city-states in the Archaic period. Both Athens and Thebes had oligarchies at this time. An oligarchy is a group of aristocrats (rich men) who tell everyone else what to do.

More about oligarchy
More about tyrants
How did people fall into debt?

Government of ancient Greece: Potsherd used to vote for Themistocles (can you see his name written on it?)

In 510 BC, the city-state of Athens created the first democratic government, and soon other Greek city-states imitated them. City-states that weren’t Greek, like Carthage and Rome, also experimented with giving the poor people more power in the late 500s BC.

But Athenian democracy did not really give power to everyone. Most of the people in Athens couldn’t vote – no women, no slaves, no foreigners (even Greeks from other city-states), no children.

These were the tokens Athenian juries used to vote: there’s solid ones on the left and hollow ones on the right.

And also, Athens at this time had an empire, ruling over many other Greek city-states, and none of those people living in the other city-states could vote either. Of course it is a lot easier to have a democratic government when you are only deciding what other people should do. Athenians didn’t even have to charge themselves any taxes!

But not all Greek city-states became democracies. Many Greek city-states, like Sparta, kept oligarchic government, or tyrannies, or monarchies, through this whole time. Thebes only became a democracy in the 300s BC)

What did Greek government do? 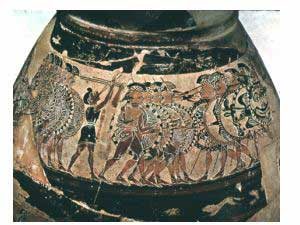 Whatever kind of government you had, ancient Greek governments all had pretty much the same responsibilities. The most important thing was to organize an army that could defend the city-state against invasions. Greek governments also negotiated treaties and trade agreements with other Greek cities, and with the Scythians, the Persians, the Egyptians, Carthage, and the Etruscans in Italy. It built port facilities so that ships could dock there.

Inside the city, the government ran a police force to keep the peace. Most of the police were enslaved men, often from Scythia. They didn’t have prisons, but the government took charge of executing criminals, exiling them, or whipping them. The government collected taxes and tolls. 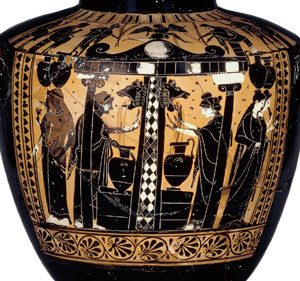 It built temples and ran religious festivals like the Olympic Games so the city could stay on the good side of the gods. Greek city governments built public water fountains and drains to keep stormwater out of the streets.  Ancient Greek government was not generally involved in health care or in schools.

Did we answer your questions about the government of Ancient Greece? Read more about democracy in Classical Athens. Or ask your questions in the comments!

Athenian Democracy, by A.H.M. Jones (reprinted 1986). One of the great social historians of the 20th century, though this isn’t easy going.

Alternatives to Athens: Varieties of Political Organization and Community in Ancient Greece, a collection of essays edited by Roger Brock and Stephen Hodkinson (2003). Each chapter presents a different kind of Greek government: oligarchies, tyrannies, monarchies, and so on. By specialists, for specialists.

Rome, the Greek World, and the East: Government, Society, and Culture in the Roman Empire, by Fergus Millar, Hannah M. Cotton, and Guy Rogers (2004). Millar is an expert on Roman government. This book deals with how the Romans governed in Greece.

Ottoman Centuries, by Lord Kinross (1979). A short introduction to Ottoman government, for the non-specialist. It’s a little out of date, so it doesn’t consider the role of Islam, or the role of women, as much as it might have.