Corinth, Greece in the Classical period 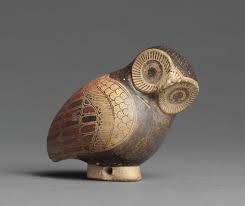 Corinth, Greece: Corinthian aryballos (perfume jar) in the shape of an owl (now in the Louvre, Paris)

In the 800s and 700s BC, Corinth was very wealthy from trade and from selling their perfume in little fancy pottery jars.

Athens in the Archaic
Black figure pottery
The Classical economy

Now that they couldn’t make a good profit, Corinth stopped producing fancy pottery to sell to other countries. 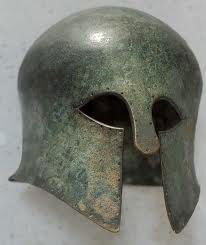 Corinth, Greece: A Corinthian helmet from the 600s BC

Corinth gets tyrants and hoplite soldiers

But even without the pottery business, Corinth was still an important port. So it was still a wealthy city. Some of the first evidence we have for tyrants and hoplites comes from Corinth, about 650 BC.

What are hoplite soldiers?
What is a tyrant?
Athens under the tyrants

Corinth never developed a fully democratic government, but by the 400s BC there was a sort of constitutional council that ran things. To show that Corinth was an important city, they sponsored the Isthmian Games, which were like the Olympic Games.

During the Persian Wars, Corinth pretty much followed the lead of Sparta, and this was also true during the Peloponnesian War, when Corinth took the side of Sparta and provided a lot of soldiers and money to the fight against Athens.

The Persian Wars
The Peloponnesian War
Philip of Macedon

After the Peloponnesian War, in the 300s BC, Corinth was involved in several smaller wars, and after Sparta collapsed Corinth even became the leader of her own alliance, the Corinthian League. By 338 BC, however, Corinth had been conquered by Philip of Macedon, like all the other Greek cities. Then in 146 BC, the Romans conquered the city of Corinth and wrecked it. But Corinth was still a great port, so soon the Romans rebuilt it.