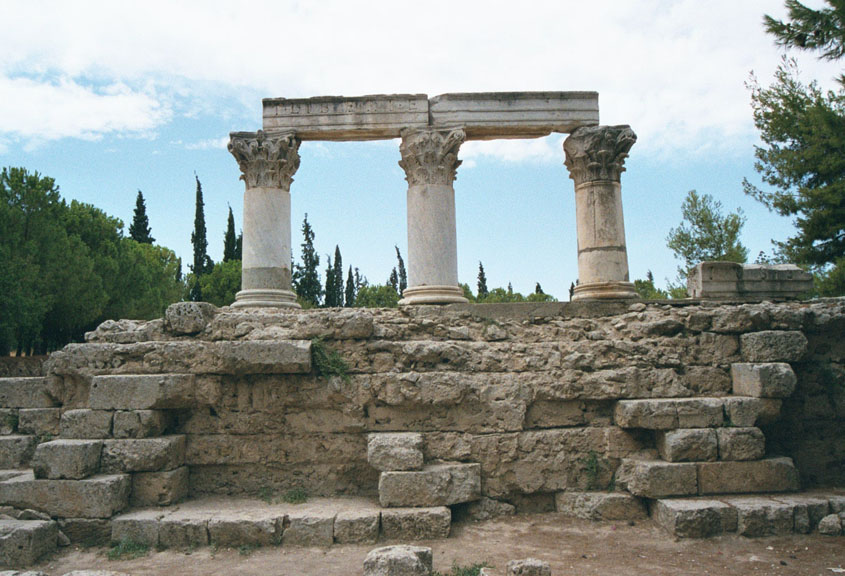 The Temple of Octavia in Corinth, dedicated to the sister of the emperor Augustus

After the Macedonians conquered Corinth in 338 BC, Corinth was not as powerful as it had been before. But Corinth was still an important port during the Hellenistic period.

When the Romans conquered Greece in the 100s BC, they ended up destroying the city of Corinth completely in 146 BC (the same year that the Romans also destroyed the African city of Carthage).

The Romans destroy Carthage
Who were the Romans?
All our ancient Rome articles

A hundred years after this destruction, in 44 BC, Julius Caesar rebuilt Corinth as a Roman city. After all, it was still a very good port! The Romans built many new buildings in Corinth in the Roman style.

The early Christian preacher Paul visited Corinth about 50 AD, and gave a series of speeches there to convert the Corinthians to Christianity.

Who was the apostle Paul?
Early Christianity

Corinth lasted as a Roman city throughout the Roman Empire, although it was attacked by Herulians (Germanic invaders) in 267 AD, and by Alaric the Visigoth in 395 or 396 (and Alaric sold many people who lived in Corinth into slavery).

Corinth in the Ottoman Empire

Corinth was still a city in the Byzantine Empire, although a terrible earthquake in 521 AD did a lot of damage.

What is an earthquake?
Byzantine Greece
Who were the Ottomans?

By the 1400s Corinth had been taken over by the Ottoman Empire, where it was no longer an important city. World trade had moved out of the Mediterranean to the Atlantic, Indian, and Pacific oceans.

St. Paul’s Corinth: Texts and Archaeology, by Jerome Murphy-O’Connor (second edition 1990). See what ancient Greeks and Romans had to say about Corinth in the time of St. Paul, in their own words (translated into English).