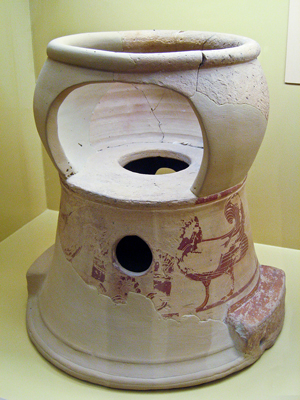 Most Greek towns had no sewage system, and just latrines for bathrooms. According to Aristophanes, a lot of men just went in the street, wherever they happened to be.

Women and girls usually went inside, using a chamber pot, and then they emptied that into the street. 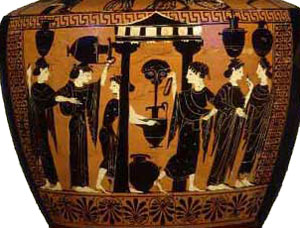 Because their sewage just drained into the nearest stream or river, the water in towns was not safe to drink. So the bigger Greek cities like Athens or Corinth built public fountains, with the water piped in from out of town, where it was cleaner. 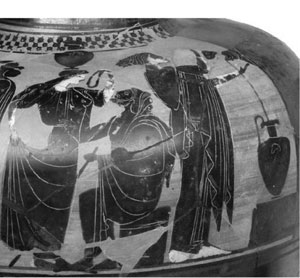 Greek women spent a lot of their time going to the public fountain to get water. They had to carry home all the water that their family drank, or cooked with, or washed in, or did laundry in, or cleaned with.

People thought of these trips to the fountain as dangerous for women, who were often harassed or assaulted by strange men there. And it was very heavy to carry the water. 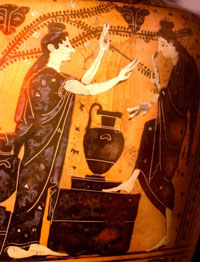 But the trips to get water every day – probably twice a day – were also a good chance for both free women and enslaved women to see their friends and catch up on the news. Greek women didn’t get to leave their houses much, so this was probably something they looked forward to.

Learn by doing: carry a full bucket of water to the end of your block.
More about chamber pots
More about Roman sewage systems

Bibliography and further reading about Greek water and sewage systems:

Water Management in Ancient Greek Cities, by Dora P. Crouch (1993). By a specialist, for specialists.