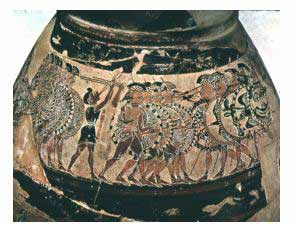 Wars were very common in ancient Greece. The Greeks lived in little city-states, each one like a small town in the United States today, with no more than about 100,000 people in each city-state. These city-states – Athens, Sparta, Corinth, Thebes – were always fighting each other over their borders. Often they would get together in leagues, a lot of city-states together, to fight as allies. They fought on land, and many city-states also had a strong navy to fight at sea.

Sometimes other people invaded Greece, and then there would be wars to defend the city-states from the invaders. Sometimes the city-states fought together, and sometimes they didn’t.
Then again, sometimes the Greeks fought in other countries. They invaded other countries and took them over, or they raided other cities and took their stuff. And they often fought for pay, as mercenaries, when one foreign country fought another (more on this here). Mercenary fighting brought in a lot of money to Greece from richer countries like Egypt and Lydia and the Persian Empire. 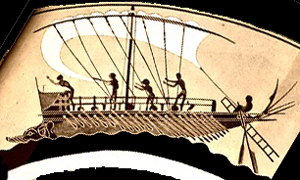 Although there were many wars in ancient Greece, most of them we don’t know very much about. There are four main wars that we do know about, thanks to the writing of Homer,  Herodotus, Thucydides and Arrian. These are the Trojan War (about 1250 BC, but it may be mainly a made-up story), the Persian Wars (490-480 BC) and the Peloponnesian War (441-404 BC) and the campaigns of Alexander the Great (331-323 BC). Then a little later, Greece was taken over by the Romans (146 BC), which we know about thanks to Polybius.

Ancient Greek War & Weapons (People in the Past), by Haydn Middleton (2002). Easy reading.

Greece and Rome at War, by Peter Connolly (1998). Not so easy to read, but not impossible either.