Polybius and the rise of Rome – Roman history 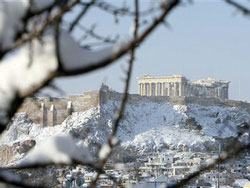 Snow in Athens (thanks BBC!)

Polybius (po-LIB-ee-us) was a rich Greek man, who was born in the Greek city of Athens, about 200 BC. When the Romans conquered his city-state, they demanded some hostages from that city. The Romans took these hostages to Rome, and they said if the city-state tried to get free of Roman rule, or did anything the Romans didn’t like, then the Romans would kill the hostages.

Polybius volunteered to be one of these hostages, and so he ended up spending the rest of his life living in Rome. While he was there, he spent his time writing a history of Rome up to that point. Polybius wrote in Greek, because he was Greek, and also because he wanted to help Greek people understand who these Romans were that had conquered them.

Today, Polybius is one of our best sources (the other one is Livy) for the history of the early Roman Republic and the Punic Wars. Most of what we know about this time comes from either Polybius or Livy.

Learn by doing: read Polybius’ introduction to his history
More about early Rome from Livy

Bibliography and further reading about Polybius and Livy: