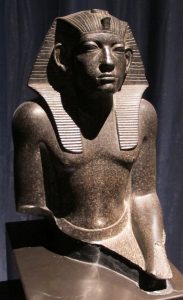 Pharaoh: an Egyptian king or queen

The Egyptian Pharaoh (FARE-oh) owned all of Egypt, and everything in it: all the land, all the tools, all the animals, and all the people. He or she could tell anybody what to do, and they would have to do it. The Egyptian government was a monarchy. The Pharaoh was like a king or queen.

What does “monarchy” mean?
Other articles about Ancient Egypt

Who could be pharaoh?

Mostly, the Egyptian pharaoh (the Egyptian king or queen) was the son or daughter of the pharaoh who had just died. You inherited power from your father or mother. But sometimes, the pharaoh died without any children, or a different family decided to try to get power. Sometimes there was a civil war. Then another family might start a new dynasty. From the beginning to the end of ancient Egypt, there were more than twenty different dynasties. But all of the pharaohs, even the outsiders, came from rich, powerful families. 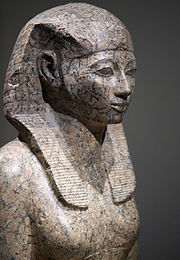 The pharaoh Hatshepsut (about 1500 BC)

But even the rich people were supposed to do whatever the Pharaohs said to do, and they had to send the Pharaohs some of the food that was grown on that land. Some, at least, of these estate-holders were priests, holding the estate for the gods, but these religious estates were run in the same way, and they also had to pay some food to the Pharaohs.

Find out more about Egyptian religion

How did the pharaoh help the Egyptians?

Mostly Pharaohs led the army to defend Egypt against invasions. When they could, they also started big projects like digging canals to bring water to fields further away from the Nile River, or to prevent flooding. As the Bible story about Joseph shows, Pharaohs also stored food in good years so they could feed their people in bad years.

What is irrigation?
The Egyptian army
Joseph and the Pharaoh
More about Egyptian food

Probably Pharaohs also organized trade with other countries, to make sure Egypt was selling things as well as buying them. For example, they probably organized big linen-weaving workshops full of enslaved women, to produce fine linen to sell to other countries.

As part of organizing trade, the Pharaohs probably helped to pay for universities, so Egyptian doctors and scientists could figure out new inventions and medicines. Egypt was famous for its doctors and probably sold a lot of medicine to their neighbors.

Rich people fought against the pharaoh

What happened in the First Intermediate Period?

Did you find out all about Egyptian pharaohs and Egyptian government? Let us know in the comments!

Bibliography and further reading about the government of ancient Egypt:


Or check out this pharaoh article from the Encyclopedia Britannica.