Were there slaves in Ancient Egypt? 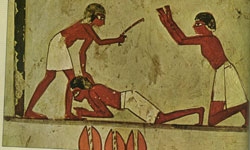 Egyptian slavery: an Egyptian man beating a slave while another begs for mercy

Where did Egyptian slaves come from?

Just like in other parts of Africa, some people in Ancient Egypt were slaves. Some of them came originally from Egypt. Many poor families sold children into slavery. Judges also sentenced criminals to slavery. (There were no prisons yet.)

Other people were sold from other countries into slavery in Egypt. Some were prisoners of war. A lot of people from Meroe and Kush (modern Sudan) were slaves in Egypt. A lot of enslaved people also came from Libya. 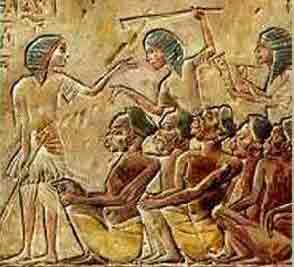 The most famous story about Egyptian slaves is the one in the Bible about how the Jews were slaves in Egypt. The Bible puts that about 1400-1200 BC. The Egyptians had just conquered Israel at this time. So probably many Jews were enslaved because of that.

The Jews in Egypt
Story of Moses

What did enslaved people do?

Most slaves in Egypt probably worked in the fields, like everyone else. But many were house cleaners, nannies, wet nurses, or cooks. They took care of sick people. Others were skilled dancers, musicians, accountants, and scribes, as Joseph was in the Bible.