Homer’s Iliad: Achilles, on a Greek black-figure vase from around 530 BC

What is the story of the Iliad?

“Sing, Goddess, of the anger of Achilles…”

The story of Homer‘s Iliad begins in the middle of the Trojan War, just at the end of the Bronze Age in Greece. It tells a story from the middle of the war, and ends before the war was over. The Greeks believed that the Trojan War lasted for ten years, and this story happens in the tenth year of the war, when both sides were really sick of being at war, and the Greeks were sick of being away from home.

The Trojan War
The Odyssey
Who was Homer?
Greek literature
All our ancient Greece articles

Is this a true story?

We don’t know if there ever really was a Trojan War, but even if there was, the Iliad is a story about it, not a real memory of it. These stories are probably related to older Hittite stories.

Who were the Hittites?

The first lines of the Iliad in Greek 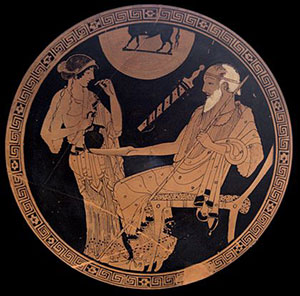 Homer’s Iliad: Briseis getting advice and consolation from Phoenix

The Iliad begins with a fight between the leader of the Greeks, King Agamemnon of Mycenae, and the Greeks’ best fighter, King Achilles (uh-KILL-eez). (The Greeks lived in a lot of little city-states, and in the Bronze Age each one had its own king, but Agamemnon was leading them all during the war).

Who was Achilles?
Is Mycenae a real place?
The Greek Bronze Age

A fight over Briseis

The Greeks had won a battle and were splitting up the booty (the stuff they had captured). Everybody had a pile of stuff. Achilles had gotten a woman among his stuff, to be his slave, whose name was Briseis (brih-SAY-iss).

But Agamemnon had had to return the woman he had chosen to her father. So he had no woman. Agamemnon decided that HE wanted the pretty Briseis to replace the woman he had given back. So he just took Briseis from Achilles. He said he was the head of the army so he would do what he liked.

Well, Achilles was so angry that Agamemnon took Briseis from him that he refused to fight for the Greeks anymore and just sat in his tent and sulked. Without their best fighter, the Greeks started losing battles. 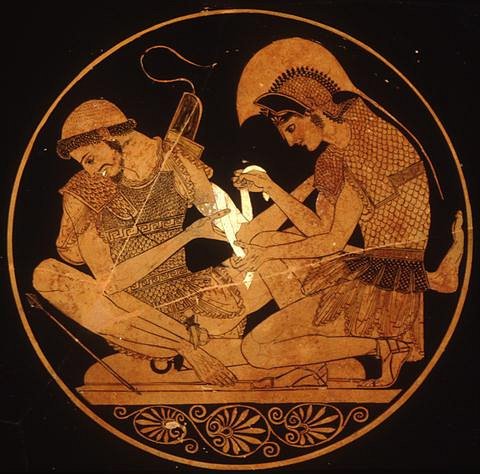 Finally Achilles’ best friend Patroclos thought of an idea. He put on Achilles’ famous armor and went out to fight. Both the Greeks and the Trojans thought Achilles had come back to the battle. They were scared. The Greeks won a big victory. But Patroclos was killed in the fighting. He might dress like Achilles, but he could not fight like him.

When Achilles heard that Patroclos was dead, he was ashamed of how he had been sulking (compare this to the death of Enkidu in the Epic of Gilgamesh).

The Epic of Gilgamesh

Achilles agreed to fight again, and Agamemnon returned Briseis. Now the Greeks really started to win. So the best Trojan fighter, Prince Hector, came out from Troy to fight Achilles. They fought for a long time, but finally Achilles killed Hector.

Hector’s father, King Priam, came to Achilles at night to ask for his son’s body back, and Achilles gave it to him. So in the end, the Iliad is about heroism, but also about mercy and doing the right thing.

The Iliad ends here, but this is not the end of the story. For more on the Trojan War, click here.

Learn by doing: A project making a Trojan gold bowl
More about the Trojan War

Bibliography and further reading about the Iliad:

The Iliad (Penguin Classics) by Homer. Translated by Robert Fagles.