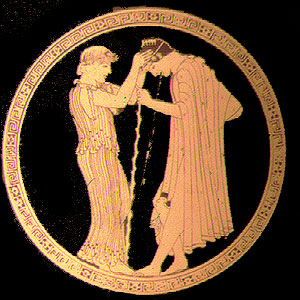 Greek friendship: People call this “After the Party”: the boy’s puking on a slave. Greeks thought that was funny.

Among the Greeks, teenaged boys and young men often became very close friends. This was a way for teenaged boys to learn how to behave around grownups.

And it was a way for young men to have close friendships and even romantic relationships, when they were not allowed to hang out with girls at all.

This was especially true in Athens and Thebes, though other Greek towns also had such friendships.

History of Athens
Where was Thebes?

When a boy was about fifteen, he might notice that the young men of his town, in their twenties, were starting to take an interest in him and trying to make friends with him. An older boy might talk to him after school, or show him a wrestling trick in the gymnasium, or invite him to a party, or take him hunting. 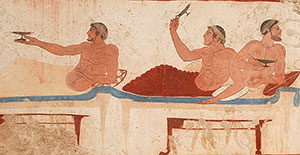 A party with several men and boys attending (Southern Italy, about 470 BC)

If the younger boy also liked the older one, the two of them might become friends. Some boys never did have a special friend like this, just as some girls today never have a high school boyfriend, and may not ever want one. Like so many Greek relationships, this was a kind of agon.

What is an agon?

Other boys had many friends (though this would make people talk about you and say mean things). Some boys did form very close friendships, though, which sometimes lasted for the rest of their lives.

Usually the boys’ parents encouraged these friendships, if the other boy seemed like a good person, just as most people’s parents today are happy if their kids have close friends, whether they are boys or girls. 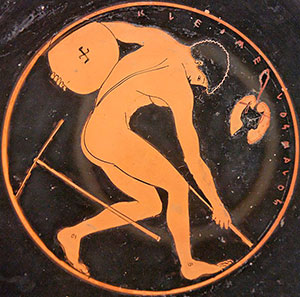 A gift from an older boy to a younger one: the cup says the boy is “kalos” – beautiful. But it’s not an accident that the boy is bending over. (Louvre, 400s BC)

Did they have sex?

As they got older…

After a while, the boys would grow up. The older one would get to be about thirty, and he would get married.

By now the younger one would be in his twenties, and so he would find a new friend among the younger boys, the teenagers.

And then after more time passed, he would get to be about thirty too, and he would get married. Sometimes the boys would stop being friends when they grew up, but often they stayed good friends, and helped each other out in politics or in business, as college roommates often do today.

Bibliography and further reading about friendship in ancient Greece: