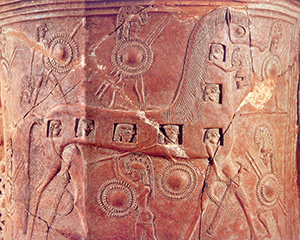 Earliest picture of the Trojan Horse story, on a  Greek vase ca. 670 BC

The end of the Trojan War

After the events of the Iliad and the death of Hector, the Trojan War still wasn’t over. Neither the Greeks nor the Trojans seemed to be able to win, until one of the Greek kings, Odysseus of Ithaca, had an idea.

A big wooden horse on wheels

“Build a big wooden horse on wheels,” he said, “big enough for a bunch of Greek soldiers to hide inside it.” So the Greeks did. Then the Greeks all pretended to sail home (except the ones hiding inside the horse!). They acted like they had given up and left. But really they hid just around the corner.

Where do horses come from?
Greek ships and sailing

An offering to the goddess Athena

Soon the Trojans found the horse. “What is it?” they asked each other. Nobody knew. (The Greek soldiers hiding inside kept very quiet). Then they found a Greek soldier hiding nearby. He said (though this was part of the trick) that the other Greeks hated him and they had left him behind. So the Trojans asked him what the horse was for. He said it was an offering to Athena.

Well, the Trojans didn’t want to upset Athena either, so they rolled the big horse into the city of Troy. It was so big it wouldn’t go through the gate, and they had to tear down a piece of the city wall to get it in. They left it at the temple of Athena, and then the Trojans had a big party to celebrate the end of the war. (Still the Greek soldiers inside the horse kept very quiet).

The Greeks take the city of Troy 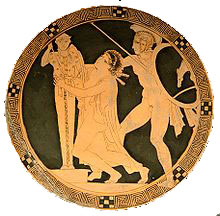 Finally everyone fell asleep, and NOW the Greek soldiers came out of the Trojan Horse and killed the guards on the walls. They signalled to the other Greeks to come attack Troy. They could get in now because the walls were torn down.

There was a big battle and the Greeks won. All the Trojan men were killed, and all the women and children were taken back to Greece as slaves.

The Trojan Horse and Virgil’s Aeneid

This story does not actually appear in the Iliad or the Odyssey, but it is told in Virgil’s Aeneid and in other ancient sources.

What’s the Aeneid?
The Battle of Jericho

But this is probably a Greek version of an older story – compare it to the Jewish story of the battle of Jericho, for example, which was probably being told about the same time.

Learn by doing: act out the story of the Trojan Horse
More about how Odysseus got home from the war

Bibliography and further reading about the Trojan Horse:

The Iliad of Homer (Oxford Myths and Legends), by Barbara Leonie Picard. A retelling of the story. Does NOT actually include the Trojan Horse story.

The Trojan War, by Olivia E. Coolidge (2001). Clear and interesting, a retelling for kids. Includes the episodes that aren’t in the Iliad (like Paris, and the Trojan Horse).

The Iliad (Penguin Classics) by Homer. Translated by Robert Fagles. A great translation! Again, the Iliad stops before you get to the Trojan Horse.