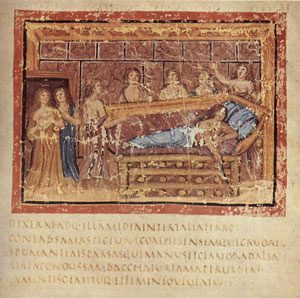 The death of Dido, Queen of Carthage, from an illustrated copy of Virgil’s Aeneid, about 400 AD

Virgil was a poet who lived during the civil wars in Rome and then in the time of the Roman Emperor Augustus, just before the birth of Jesus Christ.

So Virgil wrote a bunch of poems, called the Georgics, which are about how wonderful Italy is. The poems are about how nice it is to have peace (thanks to Augustus), and how good it is to live a simple, traditional life.

But the work Virgil is most remembered for is the epic poem called the Aeneid. This is a long poem in twelve books, like the Iliad or the Odyssey.

What is the Iliad?
The plot of the Odyssey

What’s the Aeneid about?

The hero is Aeneas (i-KNEE-ass), who was a Trojan who was supposed to have escaped from Troy when the Greeks captured it during the Trojan War.

It is the story of how, after the Trojan Horse, Aeneas and his men (like Odysseus and his men) escaped from Troy and travelled from Troy to Italy to found the city of Rome.

Dido and Aeneas: a love story

This makes the Trojans the ancestors of the Romans (and the natural enemies of the Greeks). Aeneas travels first to Carthage, in Africa. In Carthage, the queen, Dido falls in love with Aeneas. When Aeneas insists on leaving her, Dido kills herself. But Aeneas goes on to Italy, where he visits the underworld, and then to Rome.

Virgil, as a friend of Augustus, wanted his readers to see that Augustus was right to reject alliances with women, and his enemy Mark Anthony was wrong to ally himself with the foreign woman Cleopatra, in Egypt. So Dido is like a metaphor for Cleopatra here.

The real city of Carthage
Who was Cleopatra?
More about the underworld

Virgil’s death and the Aeneid

Virgil was not happy with the Aeneid. It was not published while he was alive, and when he died in 19 BC he left instructions that it should be destroyed. But his heirs ignored his instructions and published it anyway.

Bibliography and further reading about Virgil: