Who were the Hittites? West Asian history 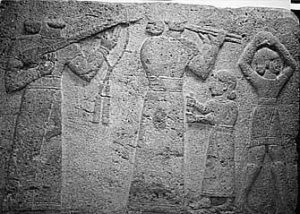 Hittites: musicians in long and short tunics (1500 BC, modern Turkey)

History of the Hittites

The Hittites were Indo-European people. They seem to have moved south from the Caspian Sea into southern Turkey around 2000 BC, about the same time that the Trojans were moving into Troy and the Greeks were moving into Greece.

Yamnaya/ Indo-European
Central Asian history
Where did the Greeks come from?
All our West Asia articles

They were different from the Semitic people who had lived there before, like the Akkadians, or the Amorites, because the Hittites – like other Indo-Europeans – rode horses and knew how to make chariots and wagons for the horses as well.

Where do horses come from?
The Akkadians
Who were the Amorites?

But pretty soon after the Hittites came to Turkey, the knowledge of horses spread all over West Asia and into Egypt as well.

The invention of iron

At some point maybe around 1500 BC, the Hittites also invented a way to smelt iron; that is, a way to take iron ore from the ground and make it into useful tools and weapons. Probably this involved mainly inventing the bellows, so blacksmiths could get their fires hot enough to melt iron. These hot fires also let glass-makers make glass bottles.

Iron and blacksmithing
Invention of the bellows
Glass-making gets better

Seeing that iron-making was a very valuable skill, the Hittites kept it a carefully guarded secret. They made iron tools and weapons and sold them to other people of West Asia. But they would not tell other people how to make them. So iron remained rare. We still call this period the Late Bronze Age.

Egypt’s New Kingdom became very powerful in the 1400s BC. The New Kingdom pharaohs started to take armies north along the Mediterranean coast. They took control of the Levant (modern Israel and Jordan and Lebanon). And then they invaded Anatolia (modern Turkey). But with their iron weapons, the Hittites fought off the Egyptians.

The collapse of the Hittites

The Hittite kingdom collapsed around 1200 BC, and so did Egypt’s New Kingdom. Nobody really knows why exactly. Some people think there was a serious drought. But whatever the reason, the collapse of the Hittites meant that they couldn’t keep the secret of iron any longer, and by about 1100 BC people all over West Asia, like the Assyrians and the Philistines, and pretty soon the Jews, knew how to make iron tools. People in Africa knew too – in Egypt first, and then in Sudan.

Who were the Assyrians?
And the Philistines?
The Jews in the Levant
Third Intermediate Period

Some Hittites, the Lycians, seem to have left Asia Minor (modern Turkey) and joined the Sea Peoples in attacking Egypt and then Israel, looking for a better place to live.

Learn by doing: what is made of iron in your house?
Third Intermediate Period
More about the Dark Ages

Bibliography and further reading about the Hittites:

The Hittites and their Contemporaries in Asia Minor, by J.G. MacQueen (1996).