Who is Achilles? Greek mythology

Achilles, on a Greek black-figure vase from around 530 BC. Is it on purpose that Achilles’ heel is showing?

Who were Achilles’ parents?

Achilles was a great warrior in ancient Greek stories. He was the son of Peleus and Thetis. Peleus was a king in Greece, and Thetis was a nymph. (That’s a sort of fairy.)

What is an Achilles heel?

When Achilles was still a little baby, his mother Thetis tried to protect him from harm by dipping him into a river that had special magic water. And it worked. Achilles could not be harmed, except for one heel that Thetis held him by as she dipped him in the water.

Now when someone is very strong but has one weak spot, we call that their “Achilles’ heel.” (Other people told stories that were pretty similar. The story of Achillles’ heel is related to an Indian story from the Mahabharata about Krishna from about the same time, and to the later medieval story of Siegfried. Maybe all three stories come from an earlier Indo-European story, or maybe these people just heard each other’s stories.)

Krishna’s story
Siegfried’s story
Who were the Indo-Europeans? 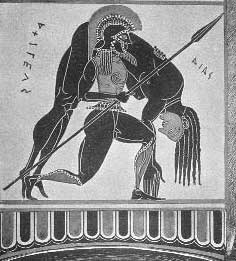 When he grew up, Achilles heard a prophecy. It was this: he could make a choice to live quietly and without fame or honor, and live a long time and die in bed, or he could choose to be famous in his lifetime and remembered always, but to die young. What would you choose?

The death of Achilles

Achilles chose to be famous and die young. He lived through the events of Homer’s Iliad, killing the Trojan prince Hector, but then (according to some stories), Hector’s youngest brother, Paris, shot Achilles in the heel with an arrow and killed him.

More about Paris
Who was Hector?

Achilles in the underworld

Later when Odysseus met Achilles in the underworld, Achilles was maybe not as happy with his decision.

When Odysseus asked him what it was like to be dead, Achilles answered that it was better to be alive, even if you were poor and miserable, than even to be the king of the dead.

Learn by Doing – a debate
More about the Trojan War

Bibliography and further reading about Achilles:

Achilles, by Mike Chapman (2004). A brief biography of Achilles, with details that aren’t in the Iliad about Achilles’ childhood.

Achilles in Vietnam: Combat Trauma and the Undoing of Character, by Jonathan Shay (1995). A best-seller, about the relationship between the rage of Achilles and PTSD in Vietnam vets.

Or check out the Encyclopedia Britannica’s article.