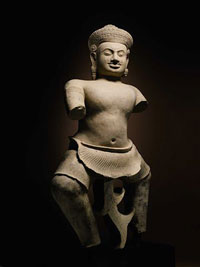 Duryodhana was the enemy of the Pandavas in the story of the Mahabharata. He’s forced out of power when the Pandavas defeat him. His friend Karna fights for him, defeating many kings, but eventually Arjuna kills Karna in a great battle.

More about the Mahabharata
Lots of India articles

How does Duryodhana die?

Duryodhana, grieving for his friend and enraged by his death, kills a great warrior, his enemy Chekitana. But then Duryodhana is killed in battle himself, by a below-the-belt blow with a mace. Duryodhana’s consolation is that he will be surrounded by friends and family in the afterlife.

(Compare the story of Achilles and Patroclos. Probably the Greek story is earlier, but nobody knows for sure.)

Learn by doing: write a story about a friend who fought for you, or when you lost a friend.
More about the Mahabharata

Savitri: A Tale of Ancient India, by Aaron Shepard (1992). A retelling for kids of one of the more feminist stories in the Mahabharata, with lots of pictures in a traditional Indian style.