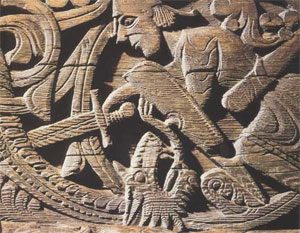 The Niebelungenlied, or the Story of the Niebelungs, was written about 1200 AD in the Holy Roman Empire. Nobody knows the name of the author, but he or she was probably writing down a story that people had already been telling for several hundred years.

Most likely the author was an educated man who worked for the Bishop of Passau. That’s in southern Germany. The story is set in the time of the fall of the Roman Empire and the invasion of the Huns, in the 400s AD.

The fall of Rome
Who were the Huns?
Early medieval timeline

This is how the story goes:

Part I: Siegfried and Kriemhild

Long ago, in the kingdom of Burgundy (now southern France), there was a princess whose name was Kriemhild. Princess Kriemhild (KREEM-hild) was determined never to marry anyone. She had had a dream where her husband was killed, and she didn’t want anybody to die because of her.

In another kingdom nearby, called Xanten, there was a prince, whose name was Siegfried. Siegfried (SEEG-freed) was a great warrior. He was famous for killing a terrible dragon called Fafnir and getting Fafnir’s golden treasure. So Prince Siegfried was rich.

Also, after Siegfried killed the dragon Fafnir, he took a bath in Fafnir’s blood. That protected him from any wounds. Except that a leaf fell from a tree while Siegfried was bathing and landed on his back. So the dragon’s blood didn’t protect that one spot. (You might compare this to the story of Achilles).

Do they get married?

(Check out another Queen Brunhild) 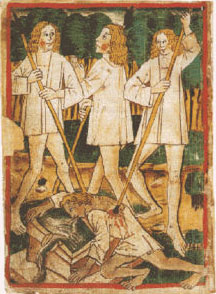 A fight breaks out

But the two couples didn’t get to live happily ever after. Brunhild began to fight with Kriemhild over whose husband was more important. Who should go in front when they went to church to hear Mass?

Hagen, who worked for Gunther, decided to kill Siegfried to keep him from fighting Gunther over this. Gunther did nothing to stop Hagen. But how could Hagen kill the great warrior, Siegfried, when everyone knows he is invulnerable?

Hagen found out from Kriemhild about the one spot on Siegfried’s back that wasn’t protected. He got Kriemhild to mark that spot with a cross, telling her it would give him Christ’s protection on that spot. Then the treacherous Hagen used Kriemhild’s cross as a target. He speared Siegfried in the back and killed him. So Kriemhild’s husband did get killed after all. As if that wasn’t enough, Hagen also stole Siegfried’s gold from Kriemhild and threw it in the Rhine river, to keep Kriemhild from using it to get revenge.

Learn by doing: listen to part of Wagner’s opera of the Ring
Second part of the Niebelungenlied

Bibliography and further reading about the Niebelungenlied: