What is Christian mass? Christianity – Religion 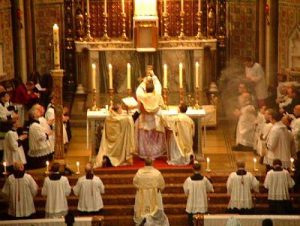 The central part of Christian life in antiquity and the Middle Ages was the Christian Mass. That was when you went to church and the priest went through a series of prayers to God. You would participate in some of the prayers.

History of Christianity
Roman religions
All our ancient Rome articles

What did people do?

Sometimes you just said Amen at the end. Other times you called out answers – these were “responses”. Both you and the priest said the Mass in Latin (in Europe and most of North Africa) or in Greek (in Greece and Egypt and West Asia).

Religions in medieval Europe
What is a priest?
Monks and monasteries

That meant that a lot of people in medieval Europe didn’t understand the words very well. They spoke French or Spanish or Italian or German and not Latin.

Here’s a video of a priest saying Mass in England

At the end of the prayers, the priest gave Communion to everyone who was not in a state of sin. That meant that you had not done anything wrong, or if you had, you had confessed it to the priest and he had forgiven you.

What is communion?
The life of Jesus
Excommunication

If you were in a state of sin, you could not take Communion. If this went on for a while, or was for a very serious reason, you might be officially excommunicated, or thrown out of the Church.

Learn by doing: go to a Catholic mass at a church near you
More about Communion
More about excommunication