What is Christian communion? History of religion 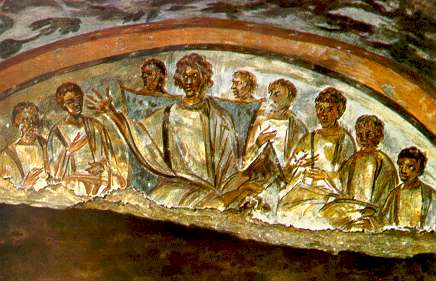 Maybe our earliest image of the Last Supper – from the Catacombs of Domitilla, 100s AD

At the Last Supper, Jesus gave his disciples bread and wine.

Where does bread come from?
What about wine?

Wait, so what is Communion?

Communion is part of Christian Mass today, when a priest gives every Christian in the church a piece of bread (a Communion wafer) and a sip of wine. Many Christians believe that the bread and wine transform inside them into the body and blood of Jesus, so they can have Jesus inside their own body.

What is a priest?
What is Christian mass?
More Christian vocabulary

Later on, Christian bishops developed the idea of excommunication. If people were bad, or made the bishops angry somehow, they would not be allowed to take communion (to eat the bread and wine) anymore. Without the bread and wine – without taking communion – people could not get into Heaven.

More about excommunication
What are bishops?

This is a video of people taking Communion

Bibliography and further reading about Communion: