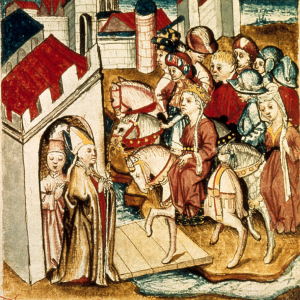 Well, naturally that wasn’t the end of the story. A woman like Kriemhild wasn’t just going to sit there, after Hagen killed her husband. After some time, King Etzel of the Huns (Attila the Hun) came and proposed marriage to Kriemheld. She was happy to marry him. Soon King Etzel and Queen Kriemhild had a little baby boy.

First part of the Niebelungenleid
Who was Attila the Hun?
Medieval European literature
All our medieval Europe articles

Kriemhild invited her whole family, and their servants, to come from Burgundy to the land of the Huns for her son’s baptism. Hagen saw that this was a trap, and that Kriemhild wanted to kill them all once she got them into the land of the Huns. But nobody else believed him. So King Gunther, Queen Brunhild, and everybody else all started riding off to the baptism. They made Hagen go along too.

When they got to King Etzel’s castle, the Burgundians wanted to keep their weapons and not put them aside for the party. King Etzel said that was rude, but he let them do it anyway. Once King Gunther, Queen Brunhild, and everyone were inside the hall, Kriemhild demanded that Hagen return her gold. Staying in character as a bad guy, Hagen used his sword to cut off her baby’s head.

After that, everyone started fighting, all over the hall. The Burgundians ended up winning control of the castle. But outside the castle there was all of the Hun army, so they couldn’t get out. Queen Kriemhild offered to let her brothers go if they would hand over Hagen, but they wouldn’t do it. After much more fighting, all of the Burgundians were killed except King Gunther and Hagen. King Etzel and Kriemhild took them prisoner.

What happened to Hagen?

Kriemhild went down to Gunther and Hagen’s jail cell, where the two men were tied up. Ignoring all the rights of the prisoners, Kriemhild cut off both men’s heads. Everyone was angry at this betrayal – Kriemhild’s Revenge – and a man called Hildebrand killed Kriemhild, which is the end of the story, as everyone mourned for the dead heroes.

More about Hildebrand
The curse of the Alcmaeonids

Learn by doing: perform part of this story as a play
First part of the Niebelungenlied

Bibliography and further reading about the Niebelungenleid:

Or check out this article on the Niebelungenlied in the Encyclopedia Britannica.