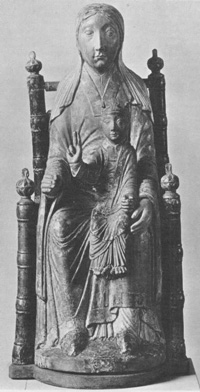 Agnes and the Pope

After the death of Henry III in 1056 AD, his widow Agnes ran the Holy Roman Empire. With the help of the king of Poland, the Popes now felt stronger. They tried to break away from the control of the Holy Roman Emperors.

Who was Henry III?
Medieval Poland
What is a Pope?
All our medieval Europe articles

The Popes insisted that priests and bishops served only the Pope. The Empress could not appoint bishops. Agnes wanted to appoint her own bishops who would help her rule her empire, but the Pope wanted bishops to work only for the Church.

In 1062, the archbishop Anno pushed Agnes out of power. But four years later her son Henry IV took over, and continued the same fight. 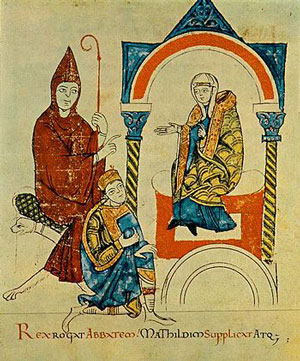 Henry kneels before Matilda of Canossa and the Pope

In the end the Pope, with the support of the powerful Italian ruler Matilda of Canossa, excommunicated Henry IV.

Who was Matilda of Canossa?
What’s excommunication?

In order to get back into the Church Henry had to do penance (say he was sorry) to the Pope. He ended up kneeling barefoot in the snow at Canossa in northern Italy in 1077 AD.

Henry V and the Pope

Near the end of Henry IV’s life, his son Henry V rebelled against him. Henry V wanted to get along better with the Pope. Soon Henry IV had to abdicate (give up being king) and let his son take over. In 1106, right after that, Henry IV died. 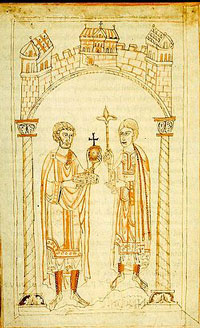 Henry V lost some important battles to King Boleslaw of Poland in 1109, but then he got stronger. Henry V turned out to want to appoint bishops just as much as his father and grandmother had. He started right away appointing whatever bishops he wanted.

Of course the Popes objected. In 1111 Henry V actually marched into Italy and took the Pope prisoner. Henry only let the Pope go when the Pope promised to let Henry do whatever he wanted. But once the Pope got free he went back on his promise. Then in 1118 (after Matilda of Canossa died) a new Pope excommunicated Henry V.

Matilda – the Concordat of Worms

Henry sent his teenage wife Matilda, the daughter of Henry I of England, to rule Italy for him now that Matilda of Canossa had died. (She was the granddaughter of William the Conqueror.) But mostly Italy’s cities just became independent.

The Republic of Florence
The City of Genoa
Pisa’s cathedral

Finally in 1122 the Pope and Henry reached a compromise called the Concordat of Worms. (There is a city in Germany called Worms). Henry V and Matilda never had any children. So when Henry died in 1125, the German nobles elected a new emperor from a different family. That’s Lothair II. Matilda (now 23) left the Holy Roman Empire and went home to rule England with her father.

Lothair II carried on the Concordat of Worms. He fought in Italy like other German kings. He built an alliance with the Byzantine Emperor John Comnenus. But Lothair II’s position was stronger, because Poland was divided into many little kingdoms and couldn’t fight him anymore. So Lothair III also fought wars to expand Germany eastward. He made Poland and Denmark agree to do whatever Germany said.

Conrad III and the Second Crusade 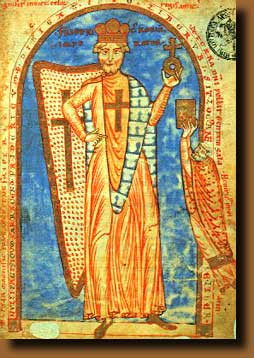 Conrad III was the grandson of Henry IV (through Henry’s daughter Agnes). He became emperor after Lothair II’s death in 1138. Conrad went on the Second Crusade, which was partly successful. But he was unable to get control of Italy.

The Italians divided into two groups. The Ghibellines (GIB-el-eens) were on Conrad’s side, and thought it would be a good idea if the German Emperor ruled Italy.  The Guelfs (GELFS) were on the Pope’s side and wanted the Holy Roman Empire to leave Italy alone. Roger II, the Norman king of Sicily, helped the Guelfs, so they mostly won.

But in 1152, Conrad’s nephew, Frederick Barbarossa (Red-beard), became Holy Roman Emperor. Frederick was a strong fighter. He insisted on controlling northern Italy as well as Germany. This idea went well at first. But later on Frederick got involved in civil wars in Germany with Henry Guelf, who had first been his friend.

The Third Crusade
Swimming in the Middle Ages

Everybody ended up choosing up sides, both Italians and Germans. Still, Frederick remained emperor a long time, and died an old man. He drowned crossing a river on the Third Crusade in 1190 AD.

After Frederick drowned, his son Henry VI took over as Holy Roman Emperor. Henry VI also got control of southern Italy. He got rich from a huge ransom he got for his hostage, Richard the Lionhearted. Like his father, Henry VI was the most powerful ruler in Europe.

Richard the Lionhearted
What is malaria?

He made plans to marry his relatives to Byzantine princesses like the Ottonians before him. He hoped to unite East and West and rebuild the Roman Empire. When Henry died after only seven years (probably of malaria he caught in southern Italy), his son Frederick II was elected Holy Roman Emperor.

Learn by doing: build a castle
More about the Third Crusade