Swimming in the Middle Ages 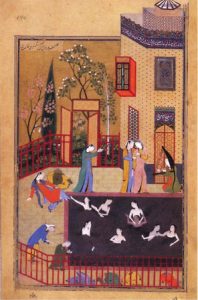 The fall of the Roman Empire and the Sassanian Empire in the 500s AD doesn’t seem to have made much difference to swimming. People in the medieval Islamic Empire kept right on swimming. Women and men still swam, naked as always. 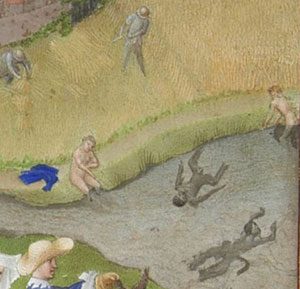 People swam further west, in Early Medieval Europe, too. In the 600s AD, the fictional character Beowulf could swim. In the late 700s AD, the real king Charlemagne could also swim, and people were swimming in China too. But then the Turks and the Mongols conquered most of Asia and Europe, and they didn’t swim. Most people stopped swimming. In Late Medieval Europe, as in this picture, people seem to be swimming breast-stroke and not the crawl. All across northern Asia, in China, in India, people had stopped swimming entirely, and even Europeans had stopped swimming the crawl stroke by the late Middle Ages. In places the Mongols didn’t reach, though, like Africa and the Americas, most people were still good swimmers.