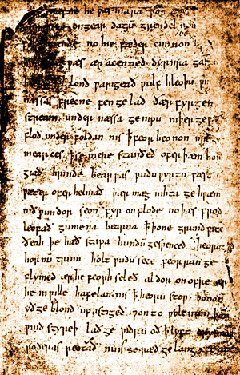 The only surviving manuscript of Beowulf

Beowulf is a long poem that somebody wrote down around 1000 AD. The poem is in Old English, so whoever wrote it probably lived in England. It’s one of the oldest poems written in English (but not the oldest). Only one copy of the poem survived  – if that had been lost, we wouldn’t know about this poem at all.

Where does it happen?

But the poem tells a story about things that happened in the early 500s AD – nearly 500 years before the poem was written down. The story takes place in Denmark and Sweden, and involves real people who lived in the early 500s AD, who we know about from other written stories in Swedish and also from archaeology.

When English poets were composing and writing this poem, these invaders had only recently moved from Denmark and Sweden to England, so they still had a lot of friends and relatives back home, and they told stories about the things these people were doing.

In the story, Beowulf (BAY-oh-wolf) is a great warrior and hero. He sails to Denmark to save King Hrothgar from a terrible monster called Grendel (GRENN-dull). There’s a fight, and Beowulf tears off Grendel’s arm, so Grendel goes home and bleeds to death (okay, that part about the monster is not a true story). 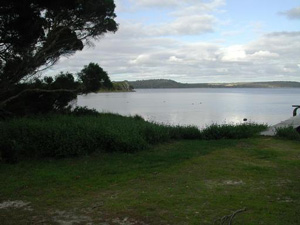 A random bay in Denmark

The next night, Grendel’s mother comes and attacks King Hrothgar’s hall, so Beowulf fights and kills her too with a magic sword. Everyone is very happy and Beowulf gets lots of rewards. (Okay, Grendel’s mom and the magic sword aren’t real either.)

Beowulf goes on to have more adventures. He helps out with a Viking raid on Frisia led by King Hygelac. (This part is really real. Frankish sources also mention this raid, so we know it happened in 516 AD.)

Who are the Franks?

Eventually Beowulf becomes King of the Geats, and he rules the Geats until he is an old man, for fifty years. But then he hears about a new monster that is scaring everybody: this time it is a dragon. Even though he is very old, Beowulf is still a hero, so he goes out and kills the dragon. But now he’s old, so this time the dragon succeeds in killing Beowulf too.

Where did the story of Beowulf come from?

The oldest example in writing is the Mesopotamian story of Gilgamesh, from about 2500 BC. In India, the Ramayana tells a similar story, where the hero Rama fights the demon Ravana to rescue his wife Sita. Around the same time, the Greeks told how Apollo killed a snake at Delphi, and Herakles killed the Hydra.

More about the Vikings

Bibliography and further reading about Beowulf:

Beowulf, rewritten by Gareth Hinds (2007). For kids, a simpler version of the story. Some scary parts might frighten younger kids.

Beowulf, rewritten by Michael Morpurgo (2006). Another rewritten version, also too scary for the smaller kids.

Beowulf: A Verse Adaptation With Young Readers In Mind

Beowulf: A New Verse Translation, by Seamus Heaney (2005). A great translation into modern English of the original text.

Grendel, by John Gardner (1971). The story from the monster Grendel’s point of view – a masterpiece. There is some cussing, appropriate to the voice of a monster.