Herakles and the hydra – Labors of Herakles 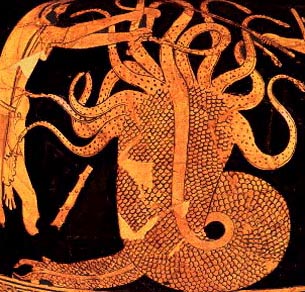 Another labor for Herakles

King Eurystheus then told Herakles he had to go kill the Hydra for another one of his labors. The Hydra was a huge snake with seven heads.

Why does Herakles do labors?
More Greek myths
All our ancient Greece articles

Harder than he thought!

Hercules thought, “Well, that sounds easy. I’ll just go cut off its heads with my sword.” But when he was fighting the Hydra, he realized that whenever he cut off a head, two more grew back out of the neck! By fighting the Hydra, Hercules was only making it stronger.

So Hercules (with his nephew’s help) thought of another plan. Whenever Hercules cut off a head, his nephew burned the stumps with fire. Then the heads did not grow back, and so Hercules was able to kill the Hydra.

The meaning of the story

(Hercules is an enemy of Hera, and Hera is an Earth goddess, and earth goddesses are always associated with snakes, that crawl on the earth).

Learn by doing: handle some snakes (at a pet store?)
More about Hercules

Bibliography and further reading about Hercules: