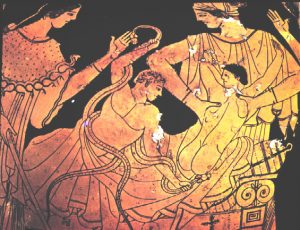 Herakles as a baby, on a red-figure vase from Athens (400s BC)

You might think you already know all about Hercules (the Greeks called him Herakles) from watching the Disney movie, but if you read this you’ll see that the Greeks told this story very differently!

Who is Zeus?
And who is Hera?

The god Hera was angry, because Zeus was her husband and she didn’t want him to have children with other women. So she sent two huge snakes to strangle the little baby. But Herakles just sat up and grabbed those snakes and strangled them. The hero Herakles gets his name from Hera, because the Greeks saw his problems as being her fault. 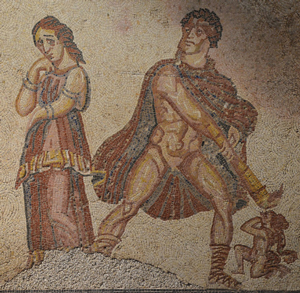 Herakles goes nuts on Megara and a kid (on a mosaic floor from Lusitania, modern Portugal, about 300 AD)

But when Herakles grew up, he was really the strongest man in the world. He married a woman named Megara and they had two children, whom he loved very much.

But Hera was still angry at Herakles. One day she sent a madness on him, so that he went crazy. He was so crazy that he killed his own children, and also his wife Megara.

When Hera let Hercules come to his senses, he screamed, “What have I done?!” He needed to find some way for the gods to forgive him for this terrible crime. He went to Delphi and asked Apollo what to do.

The oracle at Delphi
What is an oracle?
The god Apollo

Apollo said the gods would forgive Herakles if he did twelve hard jobs for Eurystheus (YER-iss-THEY-oos), the king of Argos – we call these the twelve labors of Herakles.

Not all the Greeks agreed on exactly what the twelve labors were, or what order they came in. So if you include them all, there are more than twelve labors. They are:

(Notice how much trouble Herakles has with snakes? That’s because his main enemy is Hera, and she’s an Earth goddess so snakes like her. Snakes crawl on the earth, so the Greeks thought they were like part of the earth.).

Herakles comes out ahead

When Herakles was done with the twelve labors, Apollo said he was free again, he was done being sorry for having killed his wife and children. In addition, for doing all those labors, he was going to be a god after he died! 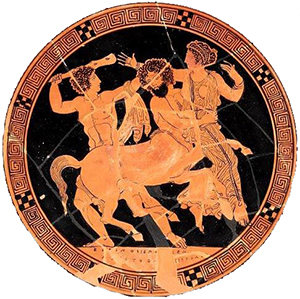 Herakles married another woman, Deianira (day-ann-EYE-rah), and they were happy for a short time. But then a bad centaur, Nessus, kidnapped Deianira. Herakles got Deianira back, of course, and shot Nessus dead with an arrow.

As he was dying, Nessus told Deianira that if she smeared his blood on Herakles it would make him love Deianira forever. Deianira smeared the blood all over Herakles’ new cloak, and then she gave it to him as a present.

The death of Herakles

But when Herakles put on the cloak, the centaur’s blood began to burn him all over! It turned out to be a poison really. He suffered and suffered, and could not find a way to stop the burning. Finally he decided to kill himself and end the pain. He went up to Mt. Olympos and became a god.

What can we learn about the Greeks?

What is the lesson of Herakles’ story? Well, it pretty much reflects the Greek view of women. Herakles commits mass murder/domestic violence. Many men do this today, and it’s likely they did in ancient Greece too. The Greeks blame his murders on mental illness, as we often do today. And they blame the murders on a woman, Hera, who drove him to it. We often do that, too.

There’s a court decision (the story mentions Apollo, but the Pythia at Delphi was a woman). Herakles has to do restitution for his crimes. This is widely seen as way too much work, considering it wasn’t even his fault and he felt terrible about it. We often feel the same way when men face consequences for domestic violence. He remarries, and this time, the situation is reversed: the woman hurts Herakles! See, women are just as bad as men. And the end is that Herakles (but not Megara or Deianira) is rewarded for all his suffering and gets even more power than he had before.

Learn by doing: check out some snakes
More about Herakles