Geryon and Herakles – Labors of Herakles 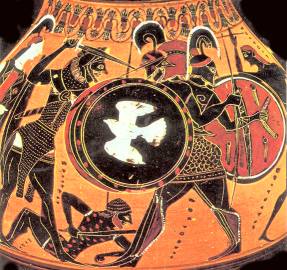 Herakles fighting the monster Geryon who had three heads and three bodies, on a black-figure vase from Athens (500s BC)

Another of Herakles’ labors

As another of the labors he did for King Eurystheus, Herakles had to steal the cattle of Geryon. But Geryon had three heads and three bodies, as you can see in the picture. So he was hard to fight.

Who was Herakles?
Where do cattle come from?
More Greek mythology
All our ancient Greece articles

How did he do it?

But this was no problem for Herakles. He just shot one arrow from the side and it went through all three of Geryon’s bodies. You might compare this story to the Bible story of David and Goliath, maybe.

Who invented the bow and arrow?
David and Goliath

Wait, he had to steal cattle?

You might feel that heroes should only undertake legal, good missions, but that’s not how ancient Greek people saw it. A lot of Greek people made their living as pirates or cattle thieves.

They didn’t think it was wrong unless you were stealing from your own people. Stealing from other people was just clever and funny, and a good way to get rich. Monsters, in any case, didn’t count as people to the Greeks. That was a kind of racism.

Learn by doing: shooting a bow
More about Hercules

Bibliography and further reading about the labors of Herakles:

The Myths of Herakles in Ancient Greece, by Mark W. Padilla (1998). By a specialist; serious stuff.