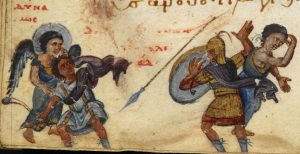 The future King David uses his sling to throw a stone at Goliath, helped by angels. From the Bristol Psalter, written in the 1000s AD in Constantinople.

When did King David live?

After they got free from the Philistines, the Jews were independent again for a while. This is the time of the story of Ruth.

Who were the Philistines?
The Jews and the Levant
West Asian religion
All our West Asia articles

(In November 2005, archaeologists found a piece of pottery in the town of Gath, where the Bible says Goliath came from, which had the name Goliath scratched on it. It probably doesn’t mean the same Goliath. But it does show that Goliath really was a name people used in Gath around that time). 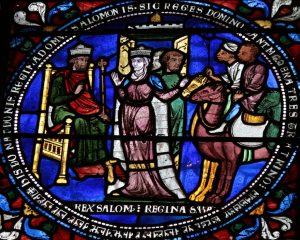 Solomon and the Queen of Sheba. She’s white but her attendants are black and ride camels. Canterbury, England, 1180 AD

Solomon (according to the Bible) built the first stone temple in Jerusalem to hold the Ark of the Covenant, which had inside it the Ten Commandments which God had given to Moses.

What are the Ten Commandments?
Who was Moses?
Egypt in the time of David

Solomon and the Queen of Sheba

The Bible says that Solomon married the Pharaoh‘s daughter from Egypt, and he also received a visit from the wealthy Queen of Sheba. Sheba was a kingdom in the Arabian Peninsula, probably modern Yemen.

Learn by doing: put on a play or make a video of the David and Goliath story
What came next: Judah

Bibliography and further reading about King David and King Solomon:

More on the Jews (Judah)
More about the Jews
Quatr.us home