Who was Antaeus? Labors of Herakles 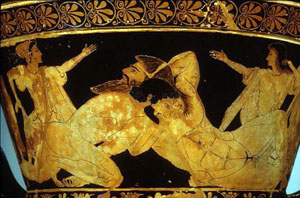 Herakles wrestling Antaeus, on a red figure vase from Athens, 400s BC

For one of his labors, Herakles had to fight a very strong man named Antaeus.

Why was Antaeus hard to beat?

But Antaeus had a special magic. Whenever he touched the ground, he could draw strength out of the ground and get stronger. Herakles kept throwing him down to the ground, but Antaeus kept getting stronger.

Herakles was an enemy of Hera, and Hera is an Earth goddess, the daughter of Gaia. So whenever Antaeus hit the ground, Hera was able to pour more power into him.

More about Hera
Or more about Gaia

This is just one of many Greek myths in which men use clever tricks or strength to defeat women, or (in this case) a man getting help from women. In Greek stories, earth and snakes (because they crawl on the earth) are metaphors for women. Compare this story to these other ones:

Apollo at Delphi
Perseus and Medusa
Herakles and the Hydra

Does this metaphor tell you anything about the story of Adam and Eve in the Bible?

How did Herakles defeat Antaeus?

Finally Herakles figured out what to do. He held Antaeus up in the air while they wrestled, and so Antaeus got weaker until Herakles was able to kill him.

Learn by doing: hold a wrestling match
More about Herakles

Hercules, by Nancy Loewen (1999). Still easy reading, but more sophisticated, with a look at how the myth was passed on and what it meant to people, as well as the story itself.