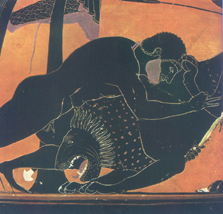 For the first of his labors, Herakles had to go out and kill a great lion that lived in Nemea (Greece). He strangled the lion with his hands and hit it with his club. Then he skinned it. After that Herakles always wore the lion skin around his shoulders like a scarf. You see the lion skin in many pictures of Herakles.

You might compare this story to the Jewish story from about the same time of Samson, who also kills a lion with his bare hands. Like Herakles, Samson is also is betrayed by his girlfriend. Both of these stories may be related to much earlier Sumerian stories about Enkidu (who is also tamed by a woman).