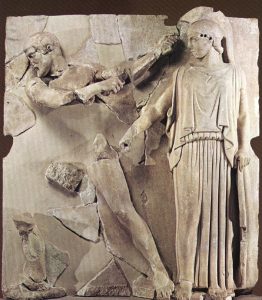 Herakles cleaning the Augean Stables (Metope from Olympia, ca. 460 BC)

Another Labor of Herakles

For one of the Labors of Herakles, Herakles had to clean out the cattle stables of King Augeus.

What was so bad about the Augean stables?

Ugh, King Augeus had just totally let them go! These stables hadn’t been cleaned in years. They were all full of cow poop. It seemed like it would take forever.

This is an example of a traditional story we might call the impossible task story. People have probably told this kind of story for a very long time, since the Stone Age. But this version with Herakles is the oldest example that anyone knows about today. The Herakles version probably goes back at least to the time of the Iliad, in the 700s BC.

How did Herakles clean the Augean Stables?

But Herakles isn’t a superhero for nothing! He’s pretty smart as well as being strong. He found a river nearby and dammed it up so the water ran right through the stables and washed them all clean.

What is a metope?
More about Athena

This picture of Herakles diverting the river, from a metope of the Temple of Zeus at Olympia (about 460 BC) shows Herakles digging, while Athena, the goddess of wisdom, shows him what to do.

Learn by doing: check out some horses
More Labors of Herakles