Otto the Great and the Holy Roman Empire 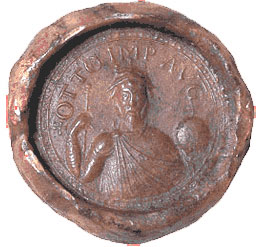 Holy Roman Empire: Otto the Great (on a seal)

What happened after Charlemagne?

Otto’s father, Henry, had been a German lord from Saxony (Northern Germany).  The other German lords elected Henry to lead them. Henry began in a weak position, hardly stronger than the other lords. But he greatly increased his prestige and power by a great victory over Hungarian invasions from the East in 955 AD, and also by attacking Poland.

Otto (who is often called Otto the Great) built on his father’s work and become even stronger. He put his brother and son in positions of power so they could help support him. And Otto also used the Church to help him get power. Getting the Pope to name him Holy Roman Emperor was part of this policy. But Otto’s plan also involved taking over Italy again, remembering that Italy and Germany had once been united as the Holy Roman Empire, and trying to recreate that empire. Otto even married an Italian noblewoman, Adelaide.

(More about the Lombards in Italy) 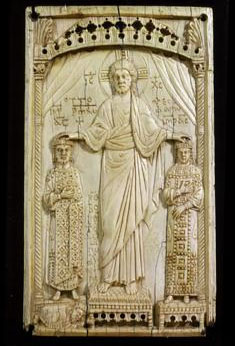 Otto’s son, also named Otto, took over when he died in 973. To show how strong the Holy Roman Emperors were already, this younger Otto married a Byzantine princess, Theophano. When Otto II died young (probably of malaria), he left a three year old son, Otto III, to be king after him.

(More about the Byzantine Empire) 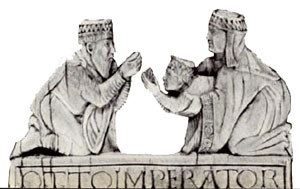 His mother, the Byzantine princess Theophano, acted as regent the whole time Otto III was growing up (as her aunt Theophano did in Constantinople at the same time). Theophano made a lasting peace treaty with Duke Mieszko of Poland.

After Theophano died in 991, Otto III’s Grandma Adelaide and powerful Aunt Matilda became the regents. Otto III died in 1002, and the German nobles insisted on electing the next king.

But Henry II was still from the same Saxon family. His elected successor, Conrad II, was also related to the Ottos. They, and Conrad’s and his son Henry III (1039-1056), all continued the same policies of fighting Poland and trying to take over Italy, while using the Church for their administrators. But under the Counts of Canossa, northern Italy was more or less independent.

(More about Matilda of Canossa)

Learn by doing: carve soap like these ivory carvings
More about Matilda of Canossa
More about the Holy Roman Empire

Bibliography and further reading about Otto the Great and the Holy Roman Empire: