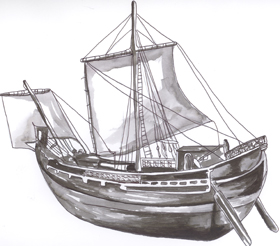 Reconstruction of the Antikythera trading ship

Many Greek men were traders, who sold things from one place to people who lived some place else. Greek traders sailed all around the Mediterranean Sea, from Spain to Phoenicia and from Carthage to  Egypt and Italy, and to Greece of course. These traders travelled in cargo ships. Cargo ships could carry a lot of stuff, but they didn’t go fast like triremes.

Even when traders were just carrying things from one Greek town to another, they generally went by sea, because Greece is so mountainous that it is hard to transport things by ox-cart, up and down the mountains.

These cargo ships used both sails and oars to get where they were going. They were not very good at sailing against the wind, and usually tried to sail when the wind would be behind them, so it could push them along. Even with the wind, they could only go about five knots (while warships could go as fast as 14 knots).

In the 500s BC and 400s BC (the Archaic and Classical periods), most of these ships weighed about 150 tons. Later, in the Hellenistic period, people built bigger ships, about 400 tons. These bigger ships – like the one in the picture – sometimes had two or even three masts, so they could carry more sails.