Like other Indo-European people, the Greeks had a general tendency to divide the world into pairs of things, one opposed to the other. Ancient Greek people saw everything as divided into two parts, which fought with each other all the time. So they tended to divide people into two groups too.

The Raw and the Cooked

There are a lot of different ways to divide people. One important way is to divide people from animals: the Greeks said that people were different from animals because animals ate their food raw, and people ate theirs cooked (that is, people know how to use fire). And people have rational thought, but animals do not. Of course then you can also distinguish educated people from ignorant people – and the Greeks did. 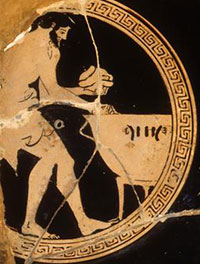 People are also different from gods. People eat food, and gods do not. And people die, but gods do not.

Another way of looking at these divisions is to divide Greek people from barbarians, people who are not Greek. The Greeks called all foreigners barbarians, even if they were very civilized like the Egyptians or the Iranians (or maybe the Scythians). 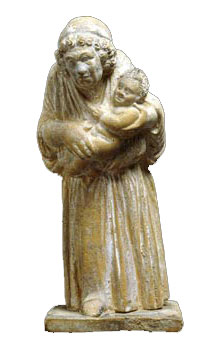 Or you can divide men from women. The Greeks did feel that men and women were very different, and naturally opposed to each other. Men, in the Greek view, were rational, thinking, stable, normal creatures, while women were irrational, hysterical, and dangerous. If you had to take sides (and the Greeks always took sides), men were more like gods, while women were more like animals. Because of this, boys went to school in ancient Greece, but girls generally stayed at home with their families.

The Greeks also divided people into different age groups. The two most important age groups were, again, often talked about as if they were in opposition to each other. These were teenaged boys and young men. Teenaged boys were those who had passed puberty but had not yet grown beards (say about 15-20 years old), while young men had grown beards but were not yet married (say about 20-30 years old). Of course all the teenaged boys soon became young men, so this is not a permanent distinction.

Finally, you can divide slave and free people. The Greeks made this distinction less than the others, because a slave can become free, and a free person can become a slave. So it is not as basic a difference as the difference between a man and a woman, or a Greek and a foreigner. But certainly there were slaves and free people in all the Greek city-states, and the Greeks felt that the difference was an important one.

The Ancient Greeks (Understanding People in the Past), by Rosemary Rees (2001). Easy reading.

Daily Life in Greece at the Time of Pericles, by Robert Flaceliere (2002).