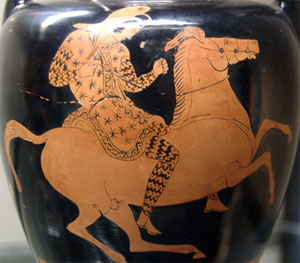 A Greek image of a Persian “barbarian” woman

Where does the word ‘barbarian’ come from?

People in ancient Greece called everyone who didn’t speak Greek a barbarian (barbaros). They said that people speaking other languages sounded like they were just going “bar, bar, bar, bar….” So that is why they called those people barbarians.

Don’t let this fool you into thinking that these “barbarians” were all living in the Stone Age. The Greeks called Persians, Romans, Phoenicians, Scythians, and Egyptians barbarians. All of these people were barbarians because they didn’t speak Greek. But they were plenty civilized! Many of these people had more technology than the Greeks. They had better doctors, and better universities. “Barbarian” just meant that they did not speak Greek.

Where did the Persians live?
What was Egyptian medicine like?
Who were the Scythians? 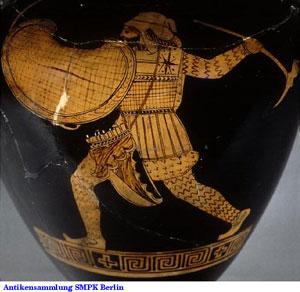 A Greek image of a Persian “barbarian” (now in Berlin)

The Greeks believed that Greek people (or at least Greek men) were more rational than these barbarians. The Greeks thought that barbarians were ruled by their emotions instead of by reason.

Also, barbarians had weird foreign customs. Some of them drank beer instead of wine. Others used marijuana. The Persians wore long pants. And the Scythians let women fight in battle and ride horses.

The history of beer
Really? They smoked pot?
Women in Central Asia

That didn’t stop the Greeks from working for foreigners, or having foreigners work for them though. In the Classical and Hellenistic periods, most of the Athenian police force was made up of enslaved Scythian. And all through Greek history, many Greek men worked as mercenary soldiers or as artists in Egypt and Persia.

Bibliography and further reading about ancient Greek ideas about “barbarians” :