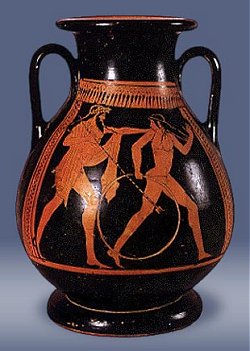 Poseidon in love with Pelops (Athens, 400s BC)

Pelops was the son of Tantalus, and so he was Zeus‘ grandson. When Pelops was still young, Tantalus murdered Pelops and served him to the gods as a stew. Luckily for Pelops, the gods figured this out before they ate him, except for Demeter ate a piece of Pelops’ shoulder.

After Zeus killed Tantalus, the gods brought Pelops back to life. Demeter gave him an ivory shoulder to replace the one she had accidentally eaten.

While Pelops was up on Mount Olympos (the home of the gods), he grew so handsome that the god Poseidon fell in love with him. Poseidon gave Pelops a magic chariot as a present. Poseidon wanted to keep Pelops with the gods forever.

But soon Pelops decided to go back down to earth. He kept the chariot though, and went to Elis, in western Greece, where later they had the Olympic Games.

Now the king of Elis, Oenomaus, had a beautiful daughter, the princess Hippodameia. She was so beautiful that he didn’t want her to get married, he wanted her to stay with him forever. Whenever a man came to marry Hippodameia, Oenomaus would challenge him to a chariot race.

But Oenomaus had a magic chariot himself, that he got from Ares. So he always won the race. Then he would kill the man and nail his head to the door of their house. When Pelops heard of this, naturally he wanted to try to race Oenomaus. After all, he had a magic chariot too! 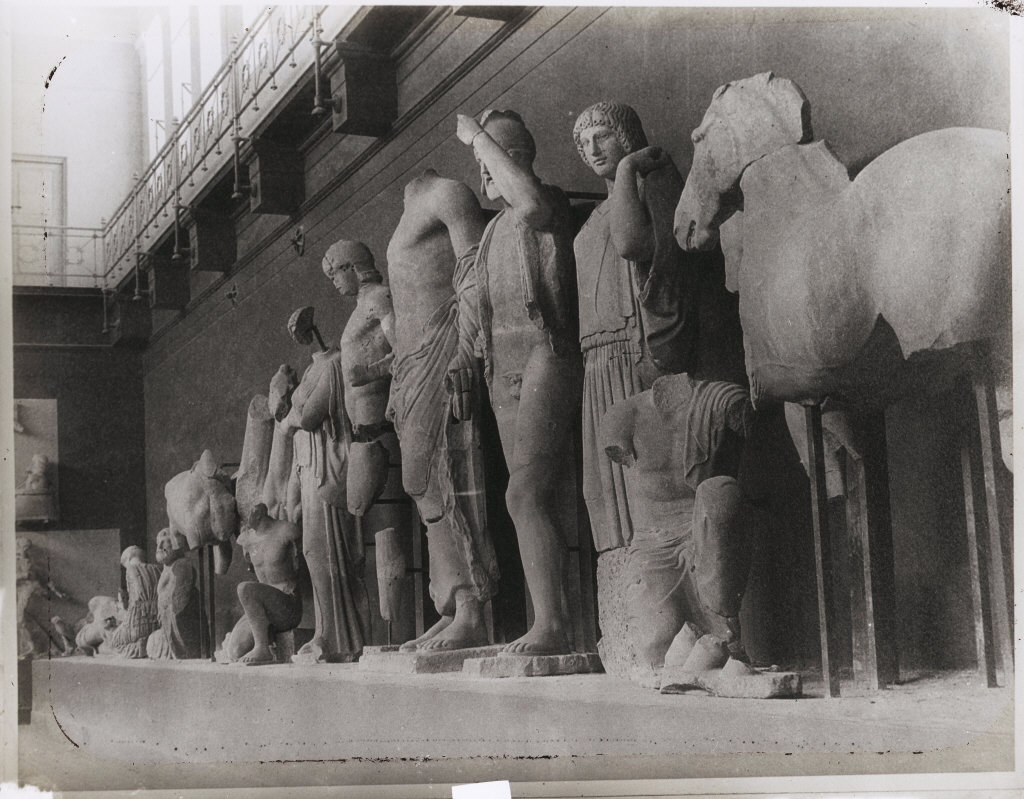 Temple of Zeus at Olympia (460 BC) – Zeus stands in the center, between Oenomaus (on the left) and Pelops (on the right). Next to Pelops is Hippodameia and then the charioteer and the horse. Thanks to Bryn Mawr for the slide!

So Pelops challenged Oenomaus to a race. But to make sure he would win, Pelops bribed Oenomaus’ charioteer (the driver) to break Oenomaus’ chariot by leaving out the linchpins (or making wax linchpins that would melt). The story’s not very clear what Pelops promised to give the charioteer, but it was something good – maybe a chance to sleep with Hippodameia, or maybe half the kingdom. Anyway Pelops did win the race, and Oenomaus was killed. Pelops got the kingdom and he got to marry Hippodameia. (Compare this to the later Turkish story of Barchin.)

But Pelops didn’t pay off his debt to the charioteer, and the charioteer cursed Pelops and his whole family: his sister Niobe, his sons Atreus and Thyestes, their children, and their grandchildren.

Learn by doing: melt some wax and mold it into a sculpture
More about Atreus and Thyestes

Bibliography and further reading about Pelops and his family:

The Oresteia, by Aeschylus, translated by Robert Fagles (Penguin Classics). The story of Atreus’ son Agamemnon and grandson Orestes. Fagles is a great translator! Includes a version for performance.