Who is Ares? Greek gods 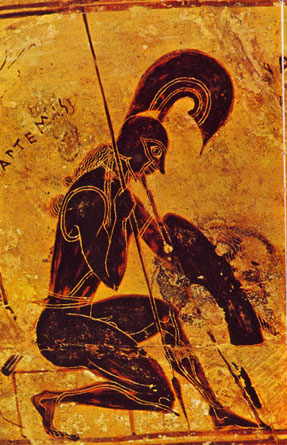 The god Ares, on an Athenian black figure vase from about 570 BC

What is Ares the god of?

Ares is the ancient Greek god of war , and so he is a rather irrational god. The god Ares enters into people and causes rage, so that they lose their tempers and want to go fight.

Ares is sometimes said to be Aphrodite‘s boyfriend, in that they’re both irrational, beyond reason. We capture the same feeling in our expression, “All’s fair in love and war.”

More about Aphrodite
The Judgment of Paris

Ares doesn’t appear in Greek stories much. He’s not a fully developed character so much as a metaphorical personification of anger. Ares was also the Greek name of the red planet that orbits near Earth, that we call Mars and the Babylonians called Nergal.

The Romans associated Ares with their god Mars. They also associated Mars with the Northern Europe god Tyr, but Tyr is a god of order and reason, and Ares definitely isn’t. In that way, he’s more like Thor.

Learn by doing: write about a time you lost your temper
More about Aphrodite

Bibliography and further reading about Ares: