Who is the Norse god Tyr? 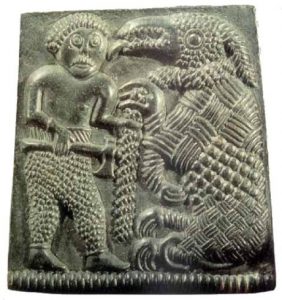 Tyr (or Tiw) was the German form of the Indo-European sky god Dyeus Piter. He was the same god as the Greek god Zeus, the Roman god Jupiter, and the Indian god Dyeus Pita. But unlike Zeus and Jupiter, Tyr was not in charge of the other gods – instead, Odin was. Probably in the earliest days of German religion Tyr was in charge, but later Odin overthrew him. Some later German stories say that Tyr was Odin’s son, but probably it started out the other way around. Indo-European gods often overthrew their fathers, like Zeus overthrew Kronos and Indra in India overthrew Dyeus Pita.

By the time we have stories about him, Tyr seems to have been the god of war treaties and contracts. He was the god of keeping your promises, and of law. That is, he was a god of order as opposed to chaos. He may have been a lot like the West Asian god Mithra, or the Hindu god Varuna. The Romans thought that Tyr was like their god Mars. That’s why their Mars Day (Mardi in French, Martedi in Italian) is our Tuesday (Tyr’s Day).

One story about Tyr is that once the gods (mainly Odin, the tricky one) captured Fenrir the wolf with a trick. Odin told Fenrir that this was only a game. He said Fenrir should let the gods chain him up as part of the game. The wolf Fenrir was suspicious, and wouldn’t let himself be chained up. Tyr offered to guarantee the deal by putting his own hand in the wolf’s mouth as a sort of hostage. But it turned out to be a trick. Once Fenrir was chained up he could not break the chain, and the other gods would not let Fenrir go. So Tyr let Fenrir bite his hand off, and now he only has one hand.

The story shows how Tyr always stands by his promises, no matter what.

Learn by doing: Should you always keep your promises? Was Tyr right? Write a persuasive essay
More about OdinMore about Zeus

Bibliography and further reading about the German gods: