Who was the Norse god Odin? 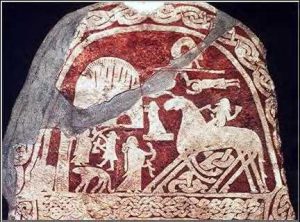 Sometime before 300 AD, people started to think of Odin (or Wotan) as the chief of the German gods, as Zeus was for the Greeks and Jupiter for the Romans. Odin replaced the earlier chief god, Tyr. Odin had two brothers, and with his brothers he killed the older god Ymir (as Zeus killed Kronos, or Indra killed Dyeus Pita). With his brothers, Odin also made the first man and woman.

People in early medieval Europe thought of Odin as very tricky and magical, often in disguise (which Zeus does too). He had only one eye, because he had given up his other eye in exchange for wisdom. 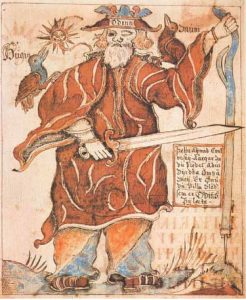 Odin was also the god of ecstasy, of standing outside yourself, of being possessed. You might be possessed by Odin if you were drunk, or very angry, or mentally ill, or desperately in love, or in the middle of fighting in a battle. It makes you do things you would not ordinarily do, like kill people or run into a fire to save somebody, like a hero. (The Greek gods can have similar effects, as told in the Iliad. We might also compare this to the Greek god of wine, Dionysos, who was the son of Zeus.)

Odin was married to Freya, and his son was Thor, which means Thunder (appropriately for a sky god). Wednesday (Wotan’s day) was named after him. In the Early Middle Ages the Vikings and the Lombards, among other people, still worshipped Odin, but by the later Middle Ages nearly all of the people who worshipped Odin had converted to Christianity, and hardly anyone worshipped Odin anymore.

Learn by doing: imagine and write a story about Odin.
More about Freya