Who is Dionysos? Ancient Greek gods 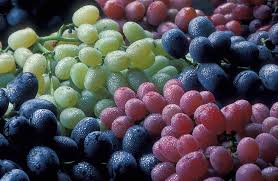 The god Dionysos is the god of wine and grapes

What is Dionysos the god of?

Who is Demeter?
And Persephone?
Wine and wine-making
More Greek gods
All our ancient Greece articles

That meant fruit of all kinds, but especially grapes (and the wine that people made from grapes). In fact, Dionysos is in some ways more like Persephone than like Demeter. He is the wine itself, just as Persephone is the wheat.

How can Dionysos be the wine?

For instance, when people drank wine, they said that they were taking the god into their own bodies. When they became tipsy, they said that the god had taken over their minds and hearts. The Greek word for this is “enthusiastic”, en= in and thus = god, taking the god into you. You were not really responsible for things you did while you were drunk, because the god made you do them. 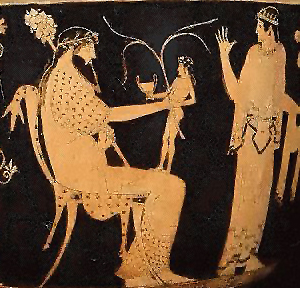 Birth of the god Dionysos from Zeus’ thigh

Dionysos is a young god

Mythologically, Dionysos is one of the younger gods, like Apollo, Artemis, and Athena. He is even younger than they are. In fact, he is so young that Homer, in the Iliad and the Odyssey, seems not to know about him yet – although his name does show up in written documents from the Late Bronze Age in Greece (about 1300 BC).

Who is Apollo?
Mycenaean Greece

Dionysos is the son of Zeus, and a mortal women named Semele (SEH-muh-lay). The story goes that Zeus and Semele were in love, and she was going to have his baby. Zeus was so happy about it that he told her (foolishly) that he would give her whatever she wished for, anything at all. (In fairy tales, and maybe in real life, this is ALWAYS a bad idea! – compare for instance the Christian story of Salome).

Who is Zeus?
The story of Salome

Semele wished to see Zeus in his true form, but Zeus’ true form is that of a lightning bolt! That would kill her! Zeus tried to talk Semele out of it, but she insisted. So he had to do it. But when he appeared right next to her as a lightning bolt, of course she burned up. Zeus managed to rescue their unborn child. He sewed the baby up in his own leg until it was born, and that was the baby Dionysos.

Dionysos and the Hindu god Indra 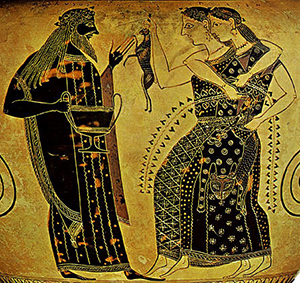 Drinking and dancing: the god Dionysos throws a party(Amasis painter, Athens, ca. 540 BC)

Because Dionysos is the son of Zeus, and the Greeks thought of him as foreign, and the Hindu god Indra is the son of Dyeus Pita, Dionysos may have started out as one form of the Indian god Indra.

But there isn’t much evidence either way, and the earliest references we have to Indra are from a little later, about 1000 BC.

Dionysos might also be related to the German god Odin. Odin is also a younger god, and also a god who takes over people’s minds and makes them lose control of themselves.

Because wine makes people lose control of themselves, a lot of stories about Dionysos have to do with the Greek idea of sophrosyne, or self-control. As you can see in the story of Phaedra, the Greeks thought it was good to be able to control your emotions, but not all the time.

The story of Phaedra
Euripides’ Bacchae

People should also be able to let themselves go enough to fall in love, or enough to just relax and enjoy themselves sometimes. The story of the Bacchae is Euripides‘ version of this idea.

Learn by doing: Talk to somebody about what it’s like to be drunk
Dionysos and the dolphins

Bibliography and further reading about the god Dionysos:

The Spirit of Spring: A Tale of the Greek God Dionysos, by Penelope Proddow (1994). Easy reading.