Dionysos and the dolphins – Ancient Greece 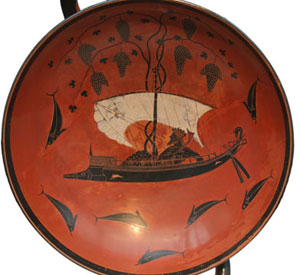 One story about Dionysos, which you can see painted on this vase, is that he once disguised himself as a rich young man and sailed on a Greek merchant ship on the ocean. The bad sailors, once they got out of sight of land, decided to throw the young man overboard and take all his money for themselves. But because Dionysos was really a god, when the sailors tried to throw him into the water, Dionysos instead turned them into dolphins and made them leap overboard (you can see the dolphins all around the ship). He stayed on the ship and made grapevines grow everywhere.

Other stories about Dionysos are about the growing and dying of the grapevines. Like Persephone, Dionysos is born in the spring, and grows through the summer, as the grapes do. In the fall, Dionysos is cut down, murdered, trampled, like the grapes. His blood is the same as the wine: his blood IS wine, and wine is his blood. Whenever you drink wine, it is (for the Greeks) the blood of Dionysos. (Compare the Christian idea of communion). But then every spring he is born again, and the cycle begins all over. (Compare the story of Osiris in Egypt.)

Because Dionysos is born again and again, over and over, he is also the subject of a mystery cult. Some Greeks believed that if you worshipped Dionysos in special ways, you could improve your life on this earth by being born again like Dionysos, starting fresh. Some people even seem to have believed that you could improve your life after death, making your death into a kind of rebirth into a better life.

Learn by doing: crush some grapes into grape juice
More about mystery cults

Bibliography and further reading about Dionysos:

The Spirit of Spring: A Tale of the Greek God Dionysos, by Penelope Proddow (1994). .