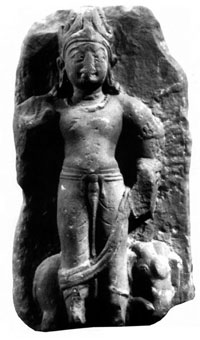 What is Hinduism?
What’s the Rig Veda?
Indian religion
All our ancient India articles

Where did Indra come from?

In the Rig Veda, he is the son of Dyeus Pita, the Yamnaya god from whom the Greeks got Zeus, the Romans got Jupiter, and the Germans got Tyr. Indra may be the same god as the Greek god Dionysos, also a son of Zeus. But Dionysos is not a storm god.

Who were the Yamnaya?
More about Zeus
Who was Jupiter?
The Norse god Tyr
Dionysos and wine

What is Indra the god of?

He was the god of rain, and also the god of war. For people who get most of their food from farming, it’s very important to control the rain so it falls just at the right time for your crop. And in India, where the monsoon brings most of the year’s rain all at once, the rain seems very much like a sudden gift from a god.

Why does it rain?
India’s environment and monsoons

What is Indra’s weapon?

His main weapon was the thunderbolt, the same as Zeus. He rode a white elephant called Airavata. Sometimes carvings of Indra show him with four arms.

What is thunder really?
Are there elephants in India?

Where did Indra live?

He lived in the clouds near the top of a tall mountain. After warriors died, they could go up to Indra’s house, where they lived forever, playing games and watching dancers perform. People worshipped Indra by sacrificing animals to him.

How Indra lost his power

But by around 300 BC, when Chandragupta united India into the Mauryan Empire and the Silk Road got started, people in India didn’t like to sacrifice animals any more, and they gradually stopped worshipping Indra so much. Instead, they began to worship the new gods Shiva and Vishnu, who didn’t need animal sacrifices.

More about Shiva
And about Vishnu
The end of sacrifice

This was part of a turn against sacrifice all over Eurasia; Christianity, which replaces animal sacrifice with the sacrifice of Jesus, is one example, but the Zoroastrians, the Chinese, the Greeks, and the Romans also gradually stopped sacrificing so much. But people still thought of Indra as a god, and told stories about him and how he lost his power.