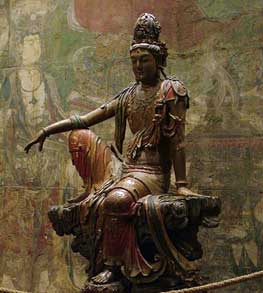 When did Chinese religion start?

People prayed to many different gods in ancient China. Some of these gods have been worshipped since the Shang Dynasty (about 2000 BC). Some have probably been around even longer, since the Stone Age. Other Chinese gods became popular later on.

Some of these gods are representations of the weather or natural forces like the sun or the moon or the rain. For instance, the goddess Ba, the daughter of Heaven, is a personification of drought. (She’s what drought would look like, if drought were a person.) Yu-huang is a sky god. Fei Lian and Feng Po Po are wind gods. Lei-Kung and Lei-zi are the gods of thunder and lightning. Heng O is the moon goddess.

Gong gong is the god of disastrous floods. Han is the god of the Han river. There were many such minor gods, each responsible for a particular river or mountain. Hou Ji is the god of millet, an important food in northern China.

Where does millet come from?

Sometimes people made abstract ideas into gods. Cai-shen was the god of prosperity. You could pray to Cai-Shen for success in business, for instance. Fan-kui is the god of butchers, and Sun-pi is the god of cobblers (shoe-makers). Fu-xing is the god of happiness, and Gong De Tian is the goddess of luck. Wei-tuo is the god of teaching.

Chinese gods protect you from harm

Cheng-huang, the City God, protects your city from enemies and brings rain for your crops. He helps you get to Heaven after you die.

Find out more about Cheng-huang

Some gods are based on Taoist ideas, like the eight gods of the Ba Xian (or Pa Hsien), who represent eight ways of being human: being young, being old, being poor, being rich, being a peasant, being powerful, being a boy, and being a girl. (The way these are organized into opposites reflects the Taoist idea of yin and yang).

What does yin and yang mean?

Other Taoist gods are Bixia Yuanjin, the goddess of dawn and childbirth, and Chu Jiang, a god of the dead in the underworld. Some are based on great victorious generals, actual men who people remembered in this way. Guanti, the Taoist god of war, was a real general of the Han Dynasty.

Guanti, the Chinese god of war
More about the Han Dynasty

Some Chinese gods are great Buddhists of the past, who are now in Heaven. Dha-shi-zhi, for example, broke the cycle of reincarnation with her great love, and now welcomes souls to Heaven in the form of flowers. Di-Cang is a great Buddhist who releases the souls of the dead from the underworld. Guanyin is a goddess of mercy, who helps childless women.

The story of Guanyin

What about Buddhism in China?