Who was Guanyin? Chinese god 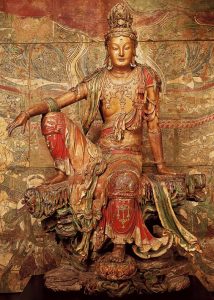 The god Guanyin, from the Liao Dynasty (about 1000 AD)

Guanyin and the underworld

Guanyin was a Chinese Buddhist god based on a real woman, the way Guanti was based on a real man. According to the story, her father murdered her. Guanyin went down to the underworld.

Buddhism in China
Who was Guanti?
Chinese religion
All our China articles

But when she got there, she recited the holy books, and that prevented the god of the underworld from torturing the dead souls. He didn’t like that, so he sent Guanyin back to be alive again. (You might compare this to the Greek story of Orpheus and Eurydice.) When Guanyin came back to life, she spent all her time studying Buddhist ideas. So the Buddha made her immortal: she would never die.

What was Guanyin the god of? 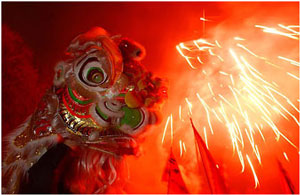 Guanyin became the god of mercy and compassion. She was very popular. People who wanted her to help them shook rattles and set off firecrackers to get her attention. Artists usually showed her as a lady holding a baby, dressed in white, sitting on a lotus.

Stories about Guanyin seem to have actually gotten started from stories about a male Indian boddhisatva called Avalokitesvara. Somehow, along the way, she changed both her name and her gender!

More about the Chinese gods
Learn by doing: Buddhism project

Bibliography and further reading about the Chinese gods:

Kuan-yin, by Chun-Fang Yu (2000). Not , but a detailed account of the historical development of this Chinese goddess.