Who was Guanti? Chinese god of war 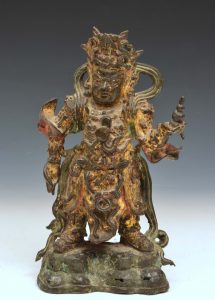 Like Cheng-Huang, Guanti was a god based on a real man. According to the story, he was born poor and when he was a child he sold tofu for a living on the street (but tofu was not actually invented until the Song Dynasty, hundreds of years later). He was a famous general during the Han Dynasty (about 200 BC-200 AD).

What is tofu?
Han Dynasty China
When was the Song Dynasty?
Chinese religion
All our China articles

What was Guanti the god of?

He was a war god, who also protected people from evil demons, and from anything that was unfair. He’s different from other war gods like the Greek god Ares because Guanti never starts wars. He only defends you when someone attacks you. He also could tell you the future.

More about the Chinese gods
Learn by doing: Visiting a Chinese garden