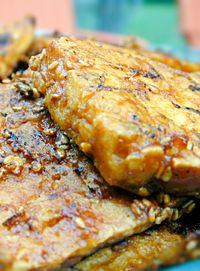 The first people to write about tofu were writers from the Song Dynasty in China, about 900 AD. Those Song Dynasty writers thought tofu had been invented by a Taoist prince of the Han Dynasty, Liu An, about 100 AD.

Or was it even earlier?

But tofu might be even earlier: the Greek historian Herodotus, in the 400s BC, describes people far to his East who “speak a language of their own” and might be Chinese. Herodotus says these people eat “a fruit like a bean.”

Who was Herodotus?
The Chinese god Guanti

From those beans they make a thick black liquid – is it soy sauce?  And they make solid cakes that they eat instead of meat, which could be tofu. He thinks this story is somehow mixed up with milk. That might be because the mashed soybeans actually look like milk.

The Chinese god of war, Guanti, was supposed to have been a tofu-seller when he was a child (before he became a god). But Guanti was a child during the Han Dynasty, so either tofu was invented earlier than most historians think, or Guanti must have been selling something else.

Why did Buddhists love tofu?

Taoists seem to have invented tofu, but soon tofu became very popular with Chinese Buddhists. The Buddhists were strict vegetarians and didn’t eat meat or milk. Tofu can taste something like meat, and it has a lot of protein like meat, but it is made out of soybeans, so it’s totally vegan.

What is Taoism?
Buddhism in China
Why do we need protein?

How do you make tofu?

To make tofu, you take soybeans and soften them by soaking them in water. Then you squash them into a soybean mash. The mashed soybeans mix with the water to make bean milk. You drain out the solid parts so it’s just a liquid. Then you add acid (vinegar or citrus juice) to the bean milk, and that makes it coagulate (clump together) into something that looks like plain yogurt, which is tofu.

What is vinegar?
Where do citrus fruits come from?
How do you make yogurt?

This video shows you how to make tofu

How did people invent tofu?

You make cheese out of milk just the same way. Probably people got the idea to make tofu from making cheese. Tofu was a way to make something like cheese for people who didn’t have cows or sheep, because there were not very many cows or sheep in China.

How do you cook tofu?

Tofu can be cooked lots of different ways. You can fry it, or bake it, or eat it raw. Tofu doesn’t have much flavor, so it will taste like whatever you cook it with: garlic, or onions, or ginger, or spicy chilis. You don’t have to refrigerate it, either. It’s a very convenient and healthy food.